Threats to the town

Threats to humans
Other hostile monsters, such as The Giants.

Watchtower is a gigantic creature made by artist Trevor Henderson. Her peaceful nature and protective personality makes a stark contrast between her and the many disturbing creatures in Trevor’s catalogue. There have been multiple theories on what her true nature and origins are, but the most likely answers is that she lives in the same universe among The Giants, but is actually an enemy of them.

The Watchtower depicts a massive quadrupedal entity, peacefully watching over a small town.

Her entire body she covered in many thick, gray hairs or possibly fur, akin to the ones seen on Mushroom Crab. She possesses four long legs that bend at the knees (or possibly ankles; like other similar animals), with the hind legs bending backwards and forelegs bending forwards. The legs end in what seems to be hooves. These legs are similar to those of an elephant's.

Her head is is somewhat bean-shaped, and is also covered in fur, obscuring some of her facial features. On the very top of her head, there are four pointy antlers protruding from the top of it; two front ones at the sides of it’s head and two more going down from it’s head and neck. These antlers resemble the pointy ends of tree branches more than those of a deer.

Underneath the creature’s hairs on her face are two large human-like eyes peering in different directions. Where the creature’s mouth is located is unknown due to most of her body being covered in hairs, but Trevor has implied that it may be the large line just above her eyes.

Her torso has a relatively similar structure to The Wandering Doom, being thin and bony, although she definitely has more muscle/fat in her torso that the aforementioned creature. She also has similarly large hips, further made apparent by her pelvic bones. There also appears to be a small tail at her rear, akin to a rabbit's tail. On her underside are two short tendrils of differing lengths, possibly arms.

Unlike most other gigantic creatures, there is nothing next to her that we can directly compare her to, however we can see that she is about the same height as the mountain she is standing on. On her up-close image, can can also see that even her eyes dwarf the size the of birds flying around her, so she has to be at least a few hundred meters tall.

Not much is known about this peculiar creature other than the caption provided. From the caption, we can see that she is the mascot and so-called “protector” of an anonymous small town. This could imply that she is a benevolent being that directly protects the town, or simply that the creature just so happens to take out any threats in the town for food or territory.

We consider the former scenario to be more likely, as we see many birds flocking around her, possibly even making nests on her thick fur without her being bothered by it. As the protector of the town, she has likely fought and possibly even defeated a number of other cryptids in the canon.

Aside from being the protector and mascot, she was also the main center of attention and tourist trade of the anonymous town, attracting many tourists from all over the world. However, her novelty is said have worn out when a number of similar beings appeared, roaming around the world. It is unknown who or what exactly these beings are, and if they are creatures we have already seen before. The photographer also states that "she may be our only hope", presumably referring to her possibly protecting them from these beings.

There is a theory that suggests that Watchtower is not a member of The Giants, and is instead her own separate creature in a different universe, the same one which most other creatures reside. This may be backed up by Trevor’s Canon Creatures List, in which Watchtower and The Giants are listed separately. This also leads more credence to the theory that The Giants and other creatures like Siren Head are actually in completely separate universes.

Since this could be the case, a possible origins for her is that she is some form of extremely mutated mammal of some sorts, perhaps a deer. This is evident by the fur covering her body and her multiple horns, which appear to be more like antlers, but does not explain her protective nature to the town. She could also be some sort of deity figure for the town, as she watches over them on a mountain, akin to a typical depiction of a peaceful deity. She could also be one of the "Saintly Entities" that Trevor mentioned, with other members being Big Charlie and Long Horse.

Another, less likely theory says that given her enormous size and nature of appearing during darker times of the day, she may actually be a member of The Giants. If this is the case, then she would have arrived on Earth via the summoning of a second Moon. She also would have been one of the first Giants to arrive due to the humans’ unfamiliarity to their nature, and therefore arrived on Earth before the collection period, where most Giants became aggressive and started collecting or destroying humans based on their sinfulness. This is also evident by her friendly nature to the humans at the time.

This is further backed up by the many tendrils On her underside similarly to other Giants like it The Wandering Faith and The Bird Watcher, which would be used to collect certain worthy humans to send them to salvation. Speaking of The Bird Watcher, she may also be a similar type of Giant to it, as they both have their fair share of similarities; namely:

However, besides these visual similarities, there is no substantial information to directly link Watchtower to The Giants. She does not collect or harm them, does not create mist, nor does she have any known new reports warning people about her.

The currently most likely theory regarding the true nature and origins of Watchtower is a sort of combination of the previous two. This theory ultimately states that Watchtower does reside in the same universe as The Giants, but is not actually a Giant herself. Instead, she is actually a separate entity that was situated in the town to fight The Giants. While this theory may seem far-fetched at first, when looking at the original caption, this theory surprisingly makes sense.

The caption of the original post states that the novelty of her massive size and strange appearance was worn out once many other similar entities had started appearing. While this could be referring to the other cryptids in the normal universe, it is most likely referring to The Giants, as they are the most visually and physically similar to her. The person quoted in the caption also states that she is their "only hope", implying that the current situation that they are in is dire, which would make sense, as The Giants' goal on Earth is to abduct or kill certain humans and cause the end of their world.

This would also imply that she has been around on Earth for a bit longer than The Giants, as she is said had been the town attraction for a long time, prior to the appearance of The Giants that caused her novelty to wear off later on. She is also possibly older than the second Moon has been around, as there was no mention of any strange activities happening during her time as the tourist attraction.

Her most useful ability is obviously her massive size, which announces her presence to the people of the town, letting her know where she is at all times. This size is also useful in fighting or stopping different threats to the town, such as other cryptids and natural disasters. Her stomps would easily crush many of the smaller monsters in the canon, and may also be able to cause devastating earthquakes, although she tends to stay in one spot most of the time in order to avoid this. Her large antlers and eyes are also useful for spotting and attacking enemies. She may also use her powerful eyesight to spot townspeople that are in danger, and alert others of this, as she would definitely have a voice loud enough to do so.

The Watchtower, watching over the small town.

The Watchtower's face seen up-close. Birds seem to be flocking around it.

Transparent image of the creature. 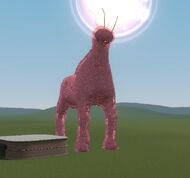