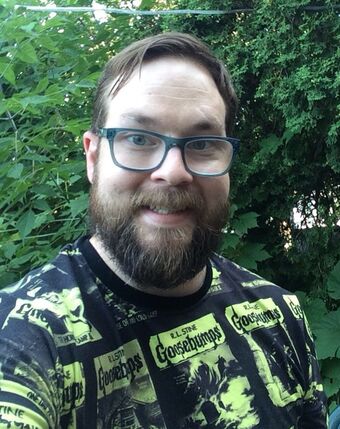 Trevor Henderson (born: April 11th, 1986), is a Canadian horror artist and illustrator and now Musical Artist. Henderson has been known for making Cryptid internet creatures, such as Siren Head, Cartoon Cat, Bridge Worm and many others.

Trevor Henderson was born on April 11th, 1986. Since Henderson was little, he has always been interested into horror and monsters. His father is also a horror lover, who introduced Henderson to the genre. Both of Henderson's parents are supportive of his work. Henderson doesn't write, although he mainly has a caption for every image he uploads.

Henderson created his most well-known character, Siren Head, in 2018. He had no intentions of rising to fame, until 2020. A video-game developer known as Modus Interactive created a video game for Siren Head back in 2018, which featured the player exploring the woods in order to find a missing hiker. When the player finds the dead hiker, Siren Head appears behind the player and begins its chase. The game ends when the player comes back to the beginning of the game and escapes Siren Head. In 2020, famous YouTubers such as Markiplier and JackSepticEye played the game, causing Siren Head and the rest of Henderson’s work to become famous.

Primarily, Henderson's work raised to fame due to the "Cursed Images" culture. People would take Henderson's images and make them into a compilation of cursed images, along with creepy or sometimes cheerful, unfitting music playing with the pictures. These videos would get millions of views on YouTube, which gave Henderson's works a spotlight.

In 2019, the horror YouTuber, known as Billy Styler, created a video where he explained who Siren Head is. The video today sits at 1 million views and it was one of the first YouTube videos which seriously popularized Siren Head as a character. Henderson is aware of the video, and is very pleasant about it. Numerous big YouTubers such as Markiplier and Jacksepticeye also made their own videos on Siren Head.