Being stared at for too long

Tree Head is an enormous creature made by artist Trevor Henderson. Its peculiar personality and humanoid appearance makes it distinct among the Giants.

The creature known as Tree Head depicts a gigantic bipedal creature seen during sunrise or sunset. It has a very human-like body and is proportionally similar to a human, albeit much, much larger. It’s skin appears to be quite thin, as it’s bones are somewhat visible in the image.

It has quite a large torso with three visible lumps (perhaps ribs showing through skin). This is connected to two thick, forwards-bending legs. It also has two large arms that are connected to it’s body by pointy shoulder blades. On the tip of it’s arms are unusually skeletal hands, containing three fingers with sharp claws, and one thumb-like digit that appears to lack any claws and is typically positioned behind the other three digits. It’s entire hand seems to be made out of jagged bones, with little to no tissue, except for maybe the thumbs.

Undoubtedly the most interesting part of this creature, however, is it’s massive, disturbing head. It is comprised of many large human-like heads with long hairs like that of a woman, giving it the appearance of a typical depiction of a tree, hence it’s name. In these heads are small, glowing white eyes that look in many directions. It also has strange tentacle-like tendrils coming out it’s heads that are to be too thick to be hairs.

Unfortunately, we are unable to see the colors and other details of the creature due to it being against the light in the image, only revealing it’s glowing eyes and silhouette.

Though it is not 100% confirmed, we assume that Tree Head is a member of The Giants, given it’s size and appearance. If this is the case, then Tree Head arrived onto Earth during the appearance of a second Moon.

What is unknown about Tree Head’s arrival however, is whether it arrived before or during the collection period of The Giants, where most Giants became aggressive and started ascending or destroying people. Given the caption however, we can assume the former, as the creature did not appear to be hostile to the photographer or even tried to approach them; only scurrying off like an animal.

Speaking of which, due to the way we see it posed in the image and the way it is described in the caption, the creature may move similarly to a dog or a bear. As we can see, the creature is actually bending at the knees and back, suggesting that it is more familiar with walking on all fours; which makes sense, as it would be harder to stand up on it’s hind legs given the weight of it’s head(s). This would also allow it to be more mobile than if it was standing on two legs.

Aside from it’s obviously capable and massive size, the creature also has great vision and a large field of view, on account of it’s many eyes. This allows it to spot and focus on small targets (like humans) from very far away, as seen in the image.

It is also very quiet as described in the caption, as well as being fairly speedy for it’s size due to moving on all fours with it’s long limbs. This allows the Giant to be surprisingly stealthy (at least, as stealthy as a Giant can be), so it would be at least somewhat hard to tell if it is near or not, given that you are not aware of your surroundings.

Then, there are the tendrils on it’s head that could possibly extend and be used to grab and collect humans, whether for food or sending them to salvation, serving as an alternative for it’s hands. 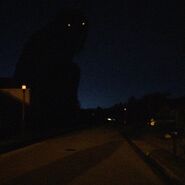 The Overlooker, a similar Giant.