5 Kilometers / 3.10 Miles (Visible parts only, it’s true height may be much taller)

People that praise it
Misty weather
Wandering around

People that fight back

The Wandering Faith, often incorrectly called Day 17, is a mysterious and enormous creature made by artist Trevor Henderson. As a collecting member of The Giants, its main duty is to ascend worthy people to "heaven" using its numerous tendrils. The creature also seems to prefer to ascend people who worship it. It is currently Trevor's most famous Giant.

It has four massive legs that have two joints, bending slightly in different directions. They appear to be quite skeletal in appearance, as the shape of the bones are visible even through the creature’s thick skin. Given the shape of it’s legs, they most likely end in either hooves, elephantine feet, or it does not possess any feet at all, only walking on stumps.

It’s main body region is quite lumpy and round, and does not have any visible protruding bones. It is also very short when compared to other Giants. It’s neck is almost as thick as the rest of the body, and leads to some sort of strange tubular “head”, which is actually still a part of it’s neck, as we can see it extend even further into the clouds, getting thinner as it goes. On the underside of the creature’s head-neck, there are numerous thin tendrils of varying lengths dangling down from it. The creature’s entire body is covered head-to-toe with thick, dark gray and jet-black skin that also appears to be very wrinkly.

The creature in the image appears to pierce the clouds just a bit, so taking into account the fact that the clouds in the image appear to be stratus clouds, we can estimate the giant’s height to be around 5 Kilometers or 3.10 Miles tall. However it’s true height is still a mystery, as we cannot see how height the rest it’s neck goes.

There is a second image of a related creature that Trevor created about a year after the original drawing, which shows a very similar creature to The Wandering Faith, albeit much thinner and smaller, as well as possessing less tendrils on the underside.

The Wandering Faith is one of the known member of The Giants, the group of titanic creatures that roam the Earth in a separate universe from other cryptids. Since this is the case, this means that The Wandering Faith arrived on Earth via the summoning of a second Moon, presumably by the Moon Worshippers. It also likely appeared prior to the aggressive period of The Giants due to the first few weather reports seemingly show the creature to be relatively friendly, but getting more active in the later weather reports.

Like other Giants of similar features, The Wandering Faith is not very aggressive or intentionally destructive, with their only goal being to collect certain chosen humans to ascend into salvation based on their worthiness.

There is a theory that suggests that The Wandering Faith is actually able to reproduce with other similar Giants due to the second image of the creature mentioned above, and Trevor has confirmed that there is some sort of connection between them. We assume that this connection is biological, with the second creature being the offspring of the first Wandering Faith, as it appears to be much smaller and thinner than it’s predecessor. We also know that the second image takes place after the first one, so the possibility of it being a young version of the original Wandering Faith is ruled out.

Aside from it’s destructive and clearly capable size, The Wandering Faith is able to grab multiple humans at once in order to ascend them using it’s extendable tendrils that hang from it’s head-neck.

It also appears to have very thick and wrinkly skin, not unlike like a large mammal. This would serve as moderate protection from attacks from human weapons and artillery.

If the theory stated earlier is true, it could imply that certain Giants, specifically collecting Giants are able to reproduce, which would exponentially increase the threat that they pose to civilization. This could also explain the similarities between it and Remain Indoors. 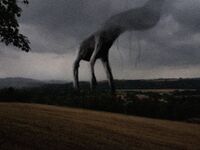 A possible image of The Wandering Faith, or it’s offspring lurking over a city to seek its targets. 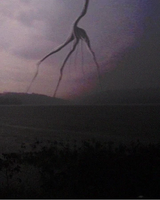 Remain Indoors, another very similar Giant that could be related to The Wandering Faith 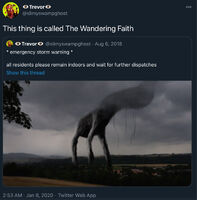