The Wandering Doom, often incorrectly called Day 18 is a gigantic creature made by artist Trevor Henderson. It is a member of The Giants and is one of the most destructive and powerful of the bunch, making it a fierce and formidable monster.

The Wandering Doom depicts a disturbingly large quadrupedal creature during sunset. It’s entire body structure is bony in appearance, with thin skin and visibly jagged ribs. It has four thick legs that has visibly taken on the shape of it’s bones, complete with holes that branch off the different bones. It also has strange protrusions on the joints of it’s forelegs; speaking of which, there are three joints on it's front legs, yet it has only two joints on it’s hind legs. It also appears to have no toes on it's feet.

It’s body somewhat resembles the structure of a human’s, albeit facing horizontally and mutated beyond recognition. It’s back is covered with its many ribs and pelvic bone that are visibly jutting out from it’s skin, making an imprint. It’s neck is freakishly thick and long, ending in a strangely round and bulbous part, which might be the creature's head. This neck could also possibly be a massive horn or some kind of trunk. On its chest area are two strange, bony protrusions forming a crescent-oval shape which some have theorized to be horns, or possibly a mouth.

It’s entire body save for the legs is covered in shadows; only revealed it’s silhouette. From the legs, we can see that it has pale brown skin covering its body.

In March of 2022, Trevor posted an image of a creature that bears a striking resemblance to the Wandering Doom. While it is not confirmed if this truly is the same creature, many fans have theorized the possibility.

In this second image, the creature is seen in an suburban environment, near a long stretch of road. While the body structure remains largely the same, the creature now possesses eight legs instead of four, but they are bony and contorted in the same way as in the previous image. The other significant difference is the front portion of the beast, which has been reduced to two extremely sharp spikes with something rope-like caught around them, which could be flesh. These spikes differ in length, as the bottom one is significantly longer, but also more crooked than the other.

It is almost certainly a member of The Giants, due to it’s enormous size and as it was introduced alongside Behemoth and The Overlooker, which are also Giants. This is also further evident by the caption, which states that they ruined everything for humanity, which is the goal of most Giants. Because of this, we know that the origins of the Wandering Doom is the same as the other Giants: they arrived on earth from the overlapped space, which was signified by a second Moon.

Due to the creature’s lack of tendrils or tentacles that could be used to grab humans in order to ascend them to Heaven, it and the other Giants shown in the original post are almost certainly Destruction Giants, which are a type of group of Giants that specialize in annihilating unworthy humans, man-made structures, and the environment. This is further solidified by the caption, stating that these Giants messed everything up for everyone, which would be more fitting too describe a Destruction Giant instead of a Collection Giants. It seems to be more aggressive than a regular destruction Giant, and can even be seen seeking some form of vengeance when it was outsmarted by the humans.

From the images we see, it is most active during dusk, where is is often wandering around to find suitable prey. This constant activity and aggression due to it being a Destruction class Giant, would make a formidable entity, and also one of the main priorities of the humans in regard to the Giants. Sure enough, in the first image, we can see it in what appears to be some sort of containment field on an island in the middle of the ocean. This seemed to only be a temporary solution though, as the second image depicts it back on land, and in a populated area that has been set on fire.

Also, the battered and bony appearance of the creature could mean that it has been attacked by something, most likely the humans. This battered appearance carries over to the second image, as we can see it being even more damaged after escaping the containment field.

The Wandering Doom, as is most Giants, is a large destructive force that can easily decimate large quantities of humans and their settlements. It is actually larger than most Giants though, and because of this, the creature does not appear to have any additional supernatural abilities besides those that are standard for Giants, like manifesting mist, breaking physical laws, and rapid growth and regeneration. However, based on caption of the second image, it might have some sort of pyrokenisis, but it is also likely the fire might have just been a result of human panic. 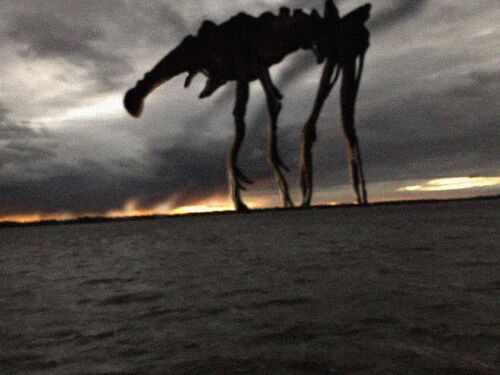 The full first image of the creature.

The full second image of the creature.