To stalk it’s victims, possibly transforming them into more walking guts and spreading the disease.

The Walking Guts depict a mass of flesh, muscles and organs taking the shape of a human. The “human” shape does not appear to posses a head or any proper hands. It’s guts appear to be mostly dry and wood-like in texture and appearance.

An interesting detail we notice is that it’s size and shape appears to differ between the two images. In the first one, it does not have a head and is considerably larger than in the second image. In the second image, it is much thinner and more human-sized, it also possesses a head in this image, which we can tell from the caption.

From what we can tell from the caption, it appears to be following the photographer from a train station where the being was first encountered. The creature only stops when the author stops and keeps up with them, even when it does not appear to move very much, suggesting that it can teleport or move faster when it’s not being observed.

It’s differing shapes between the two images could mean that it can change it’s shape and size or there are multiple of these creatures. The author states that the streets they are in are empty and nobody is around in the neighborhood. This could imply that the walking guts could actually be the residents of the neighborhood that were transformed or that the creature is somehow absorbing the residents of the city, which explains why it is larger in the second image and why the streets are devoid of people.

If the theory stated above is true, then it may be some sort of unidentifiable disease or parasite that transforms humans and possibly other creatures into a strange, fleshy mass. In this form, the disease can control the mutated individual/s and follow other uninflected individuals to an area with a larger group of possible victims in order to spread as fast as possible.

The nature of the disease allows it to use it’s transformation abilities to it’s advantage. As can see from the first image, the mutations can get quite large; definitely larger than a human. This would allow it to overpower and outspeed it’s victims. It may also be intelligent enough to disguise itself as regular people or animals, but this is not confirmed. 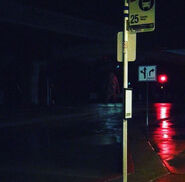 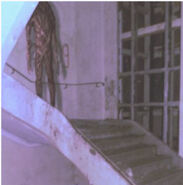