Around or inside people’s homes at night

The Pink Man also known as the Forgotten Baby, is a disturbing creature created by horror artist Trevor Henderson. As its name would suggest, this particular Cryptid bears physical similarities to that of a human infant. What is still unclear, however are its true intentions and origins, though all evidence points to them being rather sinister.

The Forgotten Baby/Pink Man is a grotesque, gangling humanoid creature, seen poking its head and a portion of its body through the doorway of a dimly-lit blue bedroom. It is covered in pale pink-ish skin. Since it is not fully visible. the other half of its body is left to imagination. Due to this, it unknown if it is a biped or a quadruped, although something else may shed some light on this question.

The torso of the creature is interesting, as it appears to be very thin and malnourished, although seems to have some fat in there as well. It is segmented a few times near the upper portion, most likely due to the ribs, which give it a worm-like appearance. The belly is seemingly normal, although also quite thin.

Despite the creature lacking any visible arms, it does have one of its legs peeking through the doorway as well. This is leg is disturbingly thin to the point of being mostly bone covered in skin, and it is not structured like a human's. It is safe to assume that the other leg of this creature has a very similar appearance.

It is spike-shaped, getting thinner the lower down it goes. Due to this, it does not posses any real feet. Its knee is also bent slightly backwards, and the leg bones seem to be directly connected to the pelvic bone, almost looking merged. The leg is covered in a red substance (most likely blood).

The most noticeable and disturbing part of the creature is its large, bald and fleshy head. The head is eerily much larger in proportion to the rest of its body, and is complete with an expressionless and unnervingly exaggerated face. Large, beady, and soulless eyes with black irises take up the top half the face.

A single, hardly-visible nostril which appear to be a fusion of two nostrils are in the center of it. It has a partially open mouth with very large red lips which seem to be underdeveloped or inflamed. The mouth lacks any teeth or a tongue. There also seems to be some slight smears of blood near its mouth to the right..

Another image of what could be the same, or a related creature was posted by Trevor on June 28, 2020; almost a year and a half after the original image. This time, a similar creature is seen running around the outskirts of a house at night.

It is noticeably much smaller than the one seen in the original image, although it retains many of the same features. It has pointy, backwards-bending legs, segmented and thin body, as well as a larger-than-usual head. It also seems to walk like a quadruped, with four legs. The main differences are that skin is slightly more saturated, the lips are not bright red, there is no blood on it, and the eyes are almost closed.

Direct information about the behavior of this strange creature is sparse. All we know about it is what is told to us by the caption provided.

From the caption, combined with the image, we can gather that the creature likes to infiltrate houses during nighttime and wanders around the quarters until eventually making its way to a person living in the house. What happens from here is entirely unknown. It does not seem to show overt aggression in the image, although the blood on its legs and near the mouth give us the impression that devours the people that it comes across.

Trevor stated in the caption of the post with it that the creature walks extremely silently and delicately, comparing it to a muted television channel. Taking this into account, when someone asked what it would say if "unmuted", Trevor replied by saying that "you really don't want to know". This would indicate that it may have malicious intents.

If the creature in the second image were truly the same as the original, it is likely that it is a less developed version of it, as it is stated to be much less stealthy, likely due to its very limited vision at the time. Overtime, it likely grew to be much larger, stealthier and more aggressive.

The most emphasized ability of this creature is its extreme stealth and quietness, which allows it to easily sneak through a person's house without them noticing until it is too late. This ability to sneak into people's homes unnoticed would also require it to have a considerable amount of intelligence. This intelligence is also exhibited in the fact that it has malicious intents, meaning that it has the intellect to grasp the concept that what it is doing is wrong, yet chooses to do so for unknown reasons (most likely for food).

Another ability of it is the very sharp and bony legs it possesses in both images. This would be an extremely effective way of impaling its victims before devouring them. From the original image, we can see that the legs are heavily drenched in dry blood, suggesting that it has done this beforehand. This would also make up for its lack of arms or teeth, with impalement being the only method for it to efficiently kill people.

Finally, if the two images are connected, then it would mean that the creature has a very rapid growth speed, as it goes from being as tall as an average person, to being about 7 feet tall within the span of just a year and a half. Throughout this maturity, it also seems to gain more senses and skills like sight and increased stealth. It may have also gotten much more intelligent during this time.

While the behavior of the creature is understood for the most part, its origins are still a total mystery. There have been no concrete clues as to how this creature came into being. For now, we only have a few theories about its origins, based on pure speculation.

This theory suggests that one of its names, "Forgotten Baby" is much more literal than it seems. It states that it is a human baby that was lost by its parents, or even worse, intentionally abandoned or left to perish. It is possible that the baby somehow became mutated into a strange quadrupedal beast, but still retains its physical infantile qualities. Its malicious thoughts and actions may be it attempting to take revenge on humanity for being mistreated.

This theory is similar to the previous one, except instead of an actual baby who became mutated and took revenge, it suggests that the violent creature is actually a physical manifestation of the pain and agony which mistreated babies experience in their short lives.

While this seems like a strange and far-fetched concept at first, another creature with a similar origins has been confirmed to be canon by Trevor, that being Chicken Ghost/God of Chickens. Chicken Ghost was manifested due to the suffering experienced by chickens used for livestock, especially when in mass. A similar phenomenon may be going on with the Pink Man.

This final theory goes against the first two, and suggests that the creature is not actually a baby or meant to directly represent babies at all. Instead, it is possible that the creature in the images is actually an extraterrestrial. This would explain their bizarre body structure. Their large heads and beady eyes even line up with the stereotypical depiction of an alien.

The alien was likely sent to Earth intentionally, with the hypothetical mission being: to adapt to the environment and possibly even thrive in it. The baby-like appearance of it may have also been a poorly-made ploy to get people to think that it is cute and attempt to sympathize with it for an easier kill, as humans have a natural instinct to protect or care for things which have similar characteristics to their babies. The aliens may have discovered this fact and tried using it to their advantage, although not fully grasping the human psyche and the concept of the uncanny valley, leading to the creature to appear more creepy rather than cute. 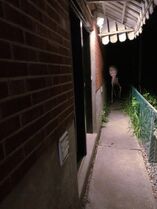 The possible second image of the creature.