The Overlooker is a mysterious Giant created by artist Trevor Henderson. Shrouded in shadows, not much is known about this creature. Even the beast's true appearance is also a mystery.

The Overlooker depicts a gigantic human-like creature staring straight at the camera.

Due to the photo being shot in the dark against the light, we can only see a silhouette of the creature, but due to it’s shape, we are able deduce that it is likely a humanoid that is sitting in a position with it’s legs bent and knees close to it’s body, almost like in a fetal position, minus the arms, which we don’t even know if it possesses them (though it most likely does).

The creature’s head appears to be covered in long hair and possesses two large, glowing eyes that are the only parts of the creature that we can see due to not being covered in shadows.

Due to the caption given, The Overlooker is known to be a member of the Giants. The caption suggests that The Overlooker, as well as the other Giants appeared on Earth via a second Moon very suddenly, then caused mass chaos and destruction to humanity.

Considering that it was introduced alongside other known hostile Giants, it is likely hostile as well. However, it may not have been initially hostile given it’s sitting position and tendency to peacefully stare at humans. This could imply that it is an Observing Giant, much like The Bird Watcher.

If this is the case, then it would likely not be a very outright dangerous or aggressive creature, instead, it will peacefully observe human behavior, and possibly inform other Giants who are unable to observe human behavior about it, so that they can act accordingly. This would explain the creature's location next to a house in a small town.

The Overlooker’s massive size and humanoid form would allow it to cause great destruction on human settlements and other buildings, as well as grabbing humans to kill or consume them. It may also have some form of night vision to be able to see humans in near pitch-darkness. As with most observing Giants, this creature may be able to relay information to other Giants through unknown means. The creature may also have some form of human-like intelligence. 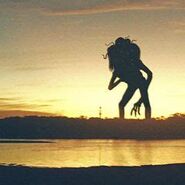