Black Or No Eyes

Waiting for people to go to their cars

The Night Waiter is an uncanny creature created by horror artist Trevor Henderson. Very little is known about this creature, but its strange appearance and mysterious nature makes it one of the more unnerving creatures by Trevor.

The Night Waiter depicts a tall and slender humanoid creature standing in a what is implied to be dimly-lit parking space at night, menacingly looking back at the cameraman as it turns away. It appears to be around 8 feet or 2.4 meters.

It has pale white skin and is sporting a jet-black coat that goes all the way down to its feet and covers its upper arms. It has dark-colored shoes with no laces and tall socks which are covered mostly in darkness. It also seems to wear dark-colored pants, which extend just above the feet but are mostly covered by the coat.

It has long white arms which are quite thin and bony. Its hands are tucked into its coat, covering them completely. Its head is very human-like, though it is hard to make out the finer details due to the creature’s position and distance. What is clear is that it has a tall head, sunken-in eyes, no hair, and slightly long nose.

Very little is known about this creature’s behavior and origins, but it is safe to assume that it is hostile, much like many of Trevor’s creations. Based on the caption, it seems to be waiting for the photographer to return to their car for unknown reasons, but most likely to attack them.

The fact that the creature knows that the photographer will return to their car means that this creature is intelligent enough to grasp the concept of what a car is and its importance to the photographer. It may have also been observing the person for some time in order to find this opportunity to strike.

What happens if the victim is attacked by the creature is unknown, as we do not entirely know its intentions and goal.

The creature’s height is greater than most humans, making it quite fast and allows it to overpower most light to middleweight people. It also seems to be fairly intelligent, maybe even as much as a human, which would make it extremely dangerous. No other abilities are known. 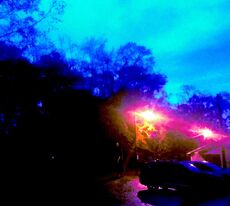 The full image of the creature 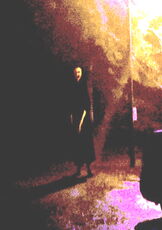 Ditto, brightened and zoomed in