Black
The Mannequin is creature created by Trevor Henderson.

It has tan-ish skin and 4 drawn on eyes, so it could be related to the God Of Roadkill who also has drawn on eyes. It is very shy , and to doesn’t Want introduce itself. It has long body features, such as it’s head and body. theres also spheres at is legs. It’s body is unusual, as it has many lines in its body. It‘s eyes can Rotate 360° around its head, giving it an advantage. 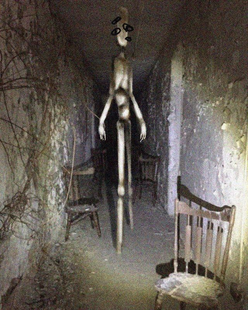 The Mannequin in a hall with chairs
Community content is available under CC-BY-SA unless otherwise noted.
Advertisement