The Man In The Red Room

The Man In The Red Room

3-5 Feet (Height may vary between appearances)

Manipulating dreams
Calling out to people

The Man In The Red Room, also known as The Thing In The Red Space is a grotesque and mysterious creature made by Trevor Henderson. Very little is known about this creature, except for its goal, which it is persistent in achieving.

The Man in The Red Room depicts a horrifically disfigured creature with a somewhat human-like shape dangling upside-down, coming out of a ceiling in a heavily red-lighted room.

The wrangled form appears to be made of a number meaty strands of varying thickness, which connect and intertwine with each other in order to form a body that resembles a short humanoid shape with bent legs, long arms, and numerous holes. These strands of flesh also share visual similarities with the mycelium of a fungus in the way they are connected and positioned.

Interestingly enough, what can be assumed to be the creature’s head is right-side up, contradicting its body and bearing a slight resemblance to The Man With The Upside-Down Face’s head, especially when he is levitating. Another detail to point out about its head is that the lower “jaw” does not seem to be attached to any other part of the body at all, instead floating on air where it would normally be if it actually was attached.

In the second drawing, the creature is depicted seemingly the same, however it does appear to have more outstretched arms and legs, as well as having grown slightly longer.

There is very little information about the creature’s origins and how it came to be, with the only hints of its creation being an excerpt from the first image’s caption, which states that it was purposefully left in the room with not intention of it being released. We know that the creature is fairly intelligent and very keen on escaping the red room, which is described by Trevor as its 'prison'.

Trevor said that it needs people for its goal, implying that it cannot physically escape on its own, and instead relying on people to free it from wherever it may be. He can only communicate to people in their dreams, by making them visualize the creature. The specifics of the room it is confined to may vary from person-to-person, leading repeating dreamers to believe that it has escaped the room. The part that is consistent about the room, however is the fact that it is always covered in a deep red light, and is mostly empty save for some chairs and such.

It is possible that a person, or a group of people may have summoned the creature accidentally or intentionally into the world, and they were not able to get it under control or it may have proved to be too dangerous for whatever they had planned. An abandoned warehouse would have been the perfect location for the people or person to summon the beast using a possible ritual, as they would be away from the public eye. While this theory may seem far-fetched, it is not the first time Trevor has made a story like this, as Black Magic appears to have a similar origins. This could also mean that it is a person who was brought back to life via dark magic and given supernatural abilities, like the aforementioned creature.

As for its abilities, the creature does not appear to follow the conventional laws of physics, as evident by its levitating jaw and ceiling-phasing means of movement, meaning it has some sort of relatively powerful supernatural force, though this is not enough to escape the seemingly impossible room that he is trapped in. Its supernatural abilities of entering and exiting ceilings at any time will make it incredibly stealthy and difficult to escape from if it becomes a threat. Though, given that it was supposed to be permanently locked in by the people who first encountered it, it’s very possible that it has malicious intents and could be very dangerous.

As previously mentioned, he has the unique ability to manipulate people’s dreams to see what it is going through, as well as somewhat communicate with them through these dreams. In both posts, the person describes their dream in unusually great detail and also acquired knowledge that they would no possible way to get from what is visually shown in the dream. Another strange property of this dream manipulation is that everyone who experiences the dreams insist that the creature is a man, most likely a regular human being. This could be an attempt to trick people into sympathizing with it. 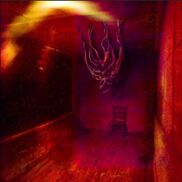 The Man In The Red Room, as seen David Romero's video, where it comes out of the ceiling.

The Man In The Red Room, seen in a different iteration of the red room.