Unknown (No full-body Image of him is available)

N/A (Bones are a yellowed white)

Manifestation as a Computer Virus

To gain respect and attention from his victims

Data Knife
Being Profaned and Disrespected
Being purged from a device

The Fetid King is a unique creature in the Trevor Henderson Mythos. He is capable of behaving like computer viruses and immune to anything other than the Data Knife, making him a terrifying being to encounter.

The Fetid King depicts a thin human skeleton with a large spinal column and seventeen ribs in total, which is much less than an average human. Its face has a haunting expression, with its mouth agape and strangely enough, its open eyelids made of skull bone. The king also has a few thin strands of hair, which is unusual for a skeleton, since the hair is attached to the skin. He also appears to wear a wooden crown that ends in uneven spikes.

The Fetid King acts as some sort of living computer virus. He makes his way through the digital realm, looking for a suitable device to infect and manifest from. Once he manages to infect a device, it is already too late, as he will slowly destroy it from the inside and eventually manifest into the physical world. So far, there is no known way to prevent or remove him from an infected device without destroying it entirely.

The first thing The Fetid King does when he accesses a device is to corrupt the device by making multiple versions of a picture, titled "kingbirth.jpg", which is an eerie photo of the king. When the file is reverse image searched on the internet, you will be met with ominous messages, like the image guesser suggesting that the image is called "the fetid king is coming soon."

After a while, the files get worse, applying a chromatic aberration effect to the ever-multiplying pictures and eventually a picture where the Fetid King is looking directly at the camera. After a while, the infected device will get an error message, which shows the words "all who dare profane the Fetid King shall take his place" multiple times, with some other words like "he is coming now", and "he will be here soon" having a chance of appearing. The latter can also come up via converting the image into a .txt file.

Eventually, he will kill his victim after some time of destroying the computer. It is unknown whenever this actually occurs, but it is implied to be not too long after the device gets infected. What is also not known is if The Fetid King kills either by exiting the device and attacking the person directly, or use the device itself to somehow kill them.

He first appeared when the victim said that a picture was constantly duplicating on his computer. When he shared the image asking for help the image started to multiply across the internet. It is implied that the creature is a man eating monster that takes the form of a computer virus. Attempting to play a video game while The Fetid King still in the PC will be met with inevitable amount of game glitches, rendering it unplayable. 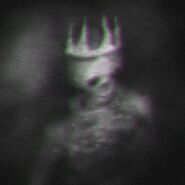 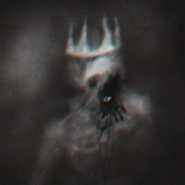 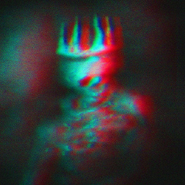 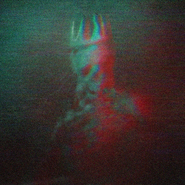 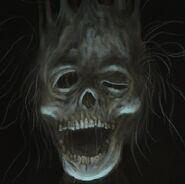 The Fetid King (close up) 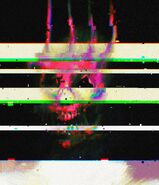 The Fetid King in a glitchy image.