The Arms In The Vent

The Arms In The Vent

A Wilderness Park in Grand Rapids, Michigan
Any other dark crevice

The Arms In The Vent are, as the name implies, unusually long human arms and hands that appear to be coming out of a ventilation system, frantically reaching and grabbing. The arms and hands are of a light skin color and bend similarly to a human’s. The hands have five, bony fingers that appear to lack fingernails. In the image, there appears to be a total of 7 arms coming out of the vent, though there may be more that are not visible.

A second image of the arms was posted by Trevor a few months after the first image. This image shows five of the arms reaching out of the ceiling of a gazebo.

From what we can tell from the images, the arms are able to manifest in any crevice and are not connect to a body, as there is not feasible way a creature could fit itself in the ceiling of the gazebo shown in the second photo, especially in such a way that the arms would dangle down like that. It may be similar to Long Horse, where they can stretch infinitely so that the opposite end of it to will never be visible. It is also currently unknown if it is a singular creature that controls the arms or if they are separate entities.

From the caption of the second image, the arms are revealed to be hostile, as it shows a police report of two young girls that the creature seemingly killed. It is unknown what the creature does to it’s victims, but it’s safe to say that it devours it’s victims in some way. The caption also states that there were remains of the victim found and that their teeth were not consumed in the attack, as implied by their dental records were requested in the police report. This suggests that it does not eat people’s bones.

We can assume that the arms are able to lure it’s prey towards it by pretending to be a human in distress, which would grab the attention of nearby people or animals. Then, if the prey gets close enough, the hands will frantically grasp and reach for whatever they can feel, as we see in the first image. This also suggests that the creature(s) are unable to see, only going off of whatever they can touch.

The arms reaching out of a gazebo ceiling. 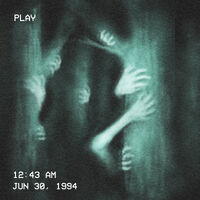 The Hokkaido Hands, another creature similar to it.