The Angel is a mysterious recurring creature by artist Trevor Henderson. Very little information has been released besides for the cryptic images and captions of the monster.

Old Houses
Any Place at Night

The Angel portrays a skeletal human-like form. The head resembles a human skull with all of it’s separate parts molded together into a singular, rounded shape with a crack down the middle of it, starting from the to of the head and ending at the nostrils. It’s face has completely empty, hollow holes replacing its eyes, nose, and mouth, while it’s singular ear is also made of bony flesh and are located much lower than it should be. The creature’s chest region is a calcified mess of flesh and bone, almost forming a ribcage with it’s interconnected veins of bony flesh.

On the sides of it’s torso are what appears to be a somewhat fleshy, “secondary ribcage” that is always seen inverted, spread out and distorted in a way that enables it to break apart and grab onto walls like arms, the way it is always seen standing in doorways. This “secondary ribcage” spreads in a tentacle-like way, somewhat resembling the roots or branches of a plant.

It’s spinal cord is disproportionately large when compared to the rest of it’s body and the lower half of it’s body consists of a pelvis and legs that are thin and human-like, albeit very bony. It is most likely called an angel due to the fact that its “secondary ribcage” looks almost like the wings of an angel.

The Angel’s appearance also differs between the three images provided by Trevor; it’s ‘wings’, torso, and head are constantly changing shape. In the first image, it’s chest is very large, almost bulging out towards the right side of it’s body, while the second image shows it much thinner, and the Patron Saint image shows it relatively normal-sized. When looking at it’s head throughout the images, the second photograph stands out; it’s head is much taller and oval-shaped as the creature seems to be almost smiling.

The most noticeable difference between the three images is it’s secondary ribcage or “wings”, which are in different lengths and arrangements every time, as well as having varying numbers of tendrils. Its second image depicts its “wings” to be no longer than its torso. The most recent photo of the Angel, standing next to a house depicts its “wings” in the largest size they have ever been, about 4-6 meters.

The height of the creature also varies between images; in the first two images, it appears to be the height of a regular doorway (80 inches/6.66 feet), to being half the size of a two-story house (120 inches/10 feet)

There is not much that can be said about The Angel here, as there is very little lore given regarding this peculiar creature. One of the few pieces of lore about it however, is the captions of the images, which appears to be quoting someone who has had an encounter with The Angel.

The caption of the first image states “when the angel came back”, suggesting that the person who is currently photographing The Angel has encountered it before. In a recent image, the caption quotes what we assume is the same person from the previous images, saying “The Angel gave me a sign”. These cryptic captions could give us a clue as to what the true nature of this creature really is. Additionally, we can also see that it is also a part of the Patron Saints series, yet we do not know what it is a Patron Saint of.

From the first two images of the creature, we can see that it prefers to stand behind doorways for reasons yet to be known. As explained earlier, the shape and size of the creature drastically differs between the three images, which could mean that it can shapeshift in some way, or that there are multiple of it’s kind.

This theory posits that The Angel is just that, an angel. In the Old Testament of the bible, certain angels are described as strange creatures that can appear in many different shapes and sizes other than just winged humans. From large wheels with many eyes to unusual combinations of a human and many other animals, the angels are very different from one-another (and frequently disturbing to humans). When taking this into consideration, it’s not too far fetched to say that Trevor Henderson’s Angel is just another regular angel taking on a disturbing form. This is further backed up by that fact that it is considered a Patron Saint.

Another piece of evidence supporting this theory is the aforementioned captions of the images, in which a person describes their encounters with the creature in minimal detail. In this case, we are assuming that the person quoted and photographing the creature in all images are one and the same. If this is true, then the person may be someone of importance to the Angel, as it frequently visits them, and at one point, even gives them some sort of sign for an unknown event. It is possible that the Angel is this person’s Guardian Angel, visiting them in order to keep check or give them signs for what to come.

Another theory says that The Angel is not of any angelic or religious origins at all, and the name was only given to it by people who have encountered it. This is likely why Trevor appears to add quotation marks whenever he says it’s name, as if quoting someone else. Instead, it is just another physical (or metaphysical) monster in the mythos that roams around the first universe, like Siren Head or Cartoon Cat. This is further backed up by the fact that there are very little references to Christian mythology in the canon Trevor Henderson universe, and that there are multiple “Gods” in it. This could suggest that the creature could be of Void origins who just so happened have similarities to an angel. Additionally, the creature’s deformed skeletal appearance and tendency to visit people to give them signs could mean that it is related to the popular Long Horse, which is also a creature from the void. 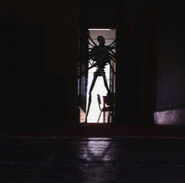 The Angel’s silhouette standing outside a doorway in a school 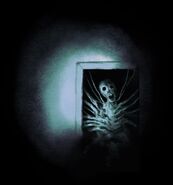 The Angel is seen yet again behind a doorway, smiling.

The Angel standing in front of a house at night.