That Feeling When You See A Really Great Dog

Get to the dog

That Feeling When You See A Really Great Dog (or Dog Looker for short) is a mysterious creature drawn by horror artist Trevor Henderson. Almost nothing is known about this creature, as its intentions, origins, and even appearance remain ambiguous.

Dog Looker depicts a silhouette of towering humanoid creature standing far out in the distance of a snowy field, where a forest is located. In the foreground, there appears to be a dog, which the creature is implied to be looking at.

The creature itself is completely concealed in darkness, leaving only its silhouette to go off of. From what we are able to see from the image, it appears to be very human-like in shape, with normal proportions and number of body parts.

It has relatively thin arms, a long oval-shaped head with small ears and no hair, fairly long neck that is not centered on its torso, and what could either short or bent legs. Like everything else, the face of the creature is heavily concealed in the mist and camera distortion but we can actually make out what appears to be two sunken-in, mismatched eyes with a sad expression, as well as a wide-open mouth near the bottom of the face. Everything else about the creature’s appearance is completely unknown.

Almost nothing has been revealed about this particular Cryptid’s behavior or origins. According to the caption, the creature is meant to express the feeling that someone gets when they see a really great dog.

This may be why the creature is seemingly running towards the dog, as most people would also feel the need to go over to a great dog when they see one. It is unknown what they creature will do after coming into contact with the dog, though most have suggested that it is going to pet it. If this is true, then it is most likely a passive or friendly creature. If not, then it may be running to the dog to attack it, which is not part of what the caption is suggesting.

One possibility is that the Dog Looker might be a member of The Giants, based on its massive size and humanoid appearance. If this was the case, then it would have the same origins as any other Giant, where it would have arrived from the Giants’ Realm, through a “Second Moon”. What  makes this theory fall apart however, is the fact that it is going after the dog, which is strange; Giants only ever go after humans.

If not a Giant, then it may be a monster from the Void, much like Siren Head. It is also possible that it is a mutated human that grew to incredible size.

Since there is barely anything revealed about the Dog Looker, its abilities are mostly unknown, besides the obvious: its massive size and mild human-like intelligence which allow it to perceive the dog as being 'great'. 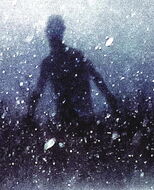 Ditto, brightened and zoomed in.