The Storm Cloud Creature is a terrifying gigantic being created by horror artist Trevor Henderson. Its unique supernatural abilities makes it one of the more dangerous creatures in its group.

The Storm Cloud Creature depicts a gigantic bipedal creature levitating above a small mountain range in the distance. The creature has a unique appearance, in that it appears to be completely skeletal and has two pairs of both limbs. It also seems to have the body structure of different animals for each main part of its body.

Starting with the head, it seems to mostly resemble the skull of a human, given its vertically-oriented circular shape. Since it is very far off in the distance, it is difficult to make out the exact features of the face. The head itself is connected to the torso via unusually long and thick cervical vertebrae.

The torso, as expected from a skeleton, is comprised only of the spinal column and the ribs. The spine is very thick and protrudes outwards significantly, especially near the bottom but gets thinner as it goes up, and remains the same when it reaches the shoulders. The creature only has three ribs that seem to go all the way around the spine.

The ‘pelvis’ of the creature is actually just the final segment spinal column that has been enlarged. The first pair of legs protrude from the front of it and second pair from the back, giving its lower half a table-like structure. The legs themselves look like those of an animal, bending in strange ways. The short upper legs stretch out upwards, while the much longer inner legs bend down, inwards. It also has large, thin and bird-like feet.

Finally, the arms of the beast are completely unique. There is one pair on the shoulders and another one under it. The bottom pair are much longer than the top and are bent similarly to the arms of a praying mantis. The other pair bend down and then up, with the hands outwards, giving it the appearance of shrugging. The lower part of arms are thin, yet the upper parts are strangely thick, which is strange for a skeleton. The hands are mere thin and long claws with seemingly no palms.

While it is currently not confirmed, the Storm Cloud Creature is most likely a member of the group of creatures known as The Giants. It meets two of the main conditions that classifies creatures as Giant, those being its obviously large size and manifestation of storm clouds and mist surrounding it, which is an ability unique to Giants. While it is clearly not as large as most other Giants, this can be explained by the fact that it is a flying Giant, who are typically smaller than the rest of their members.

Taking this into account, this means that the creature originated from the same place as all the other Giants: The Giants’ Realm. As seen in the Tendril Giant’s caption, the Giants entered Earth from their realm via a second moon, which was likely a rift to the Giants’ Realm opened up with the influence of the Moon Worshippers.

The Storm Cloud Creature would behave similarly to other Giants, if it is one. Judging by its appearance, it is most likely a Collection Giant as Its large size and levitation abilities mean that it would be very effective and efficient at collecting humans and ascending them to ‘heaven’. It may also double as a Destruction Giant and kill some unworthy people it encounters.

Looking at the image, it seems to be much more fixated directly at the cameraman compared to most other Giants, who are typically just looking off in a random direction. This might imply that it is more calculated than most Giants and attacks specific humans one at a time, instead of causing mass destruction and grabbing people en masse.

The creature’s most notable ability besides its massive size is the unique ability to levitate. While Giants are well-known for defying physics, this is the first Giant to directly levitate and fly without wings.

It appears to be slightly more intelligent and malevolent than many other Giants, so it would not hesitate to come after you if it sees you as a target for collection or killing, making escape and evacuation incredibly difficult.

Finally, it being made of Giant bones means that it is incredibly tough and durable, so injuring it severely would be a very challenging task. 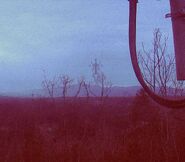