The Sky Screamer is a creature made by artist Trevor Henderson.

The Sky Screamer depicts a massive, dreadful creature looming over a plaza between buildings. The creature only has a head and appears to be missing a neck, or any other part of a human-like body.

Its face is missing most of the features that one would expect, instead only having two large, circular eyeholes and a gaping triangular mouth that appears to be frowning. Both of these facial features seem to be emitting a powerful white glow, almost like a room with it’s light turned on, as seen from a dark doorway. The way it glows also seems to suggest that the eyes and mouth are actually merely holes from which the light is emitted and not actually glowing eyes and mouth.

On what would be it’s torso are thick, long tendrils that appear to protrude in all directions, dangling down from it’s neck. The ones to the very right of the creature also appear to be longer, stiffer, pointier, and outward facing than the rest.

Unfortunately, like several other giant creatures made by Trevor, we can only see the creature’s silhouette in the image, meaning that we cannot see the finer details and colors of it. We can, however, estimate it’s height when we compare it to the building it is hover over. We can see that it is slightly shorter than a five story tall building, which is normally about 75 Feet or 23 Meters. When accounting for distance, we can estimate it to be around 70 Feet or 22 Meters.

An old 3d model of the creature made by user Official Skull. 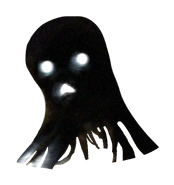 A transparent image of the creature. 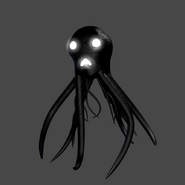 A finished 3d model of the creature.