Missing a member
Their sensory organs being poked

Sensory Processes are a group of strange little creatures drawn by horror artist Trevor Henderson, who was inspired to make them by an unorthodox illustration in a textbook. They work together in a pack and each of them have one of the five main senses that they use to coordinate. Their intention and origins are currently unknown.

Sensory Processes all depict small, bipedal hairless beings with red skin and two short legs. They have a simple smooth oval shape with no discernible head, body, hands, or feet. Their short legs simply end in nubs. Their skin appears to be somewhat leathery in texture, but also seems to be covered in a thin layer of a reflective substance.

While all five of the creatures look the mostly same, their main distinction lies in what could only be described as their ‘faces’, which contain a single enlarged version of a human-like sensory organ in the middle. Each creature has a different organ, making up the five main senses that most people first learn about. These sensory organs also seem to have slightly more orange skin than the rest of the bodies.

This creature is the most noticeable one, as it is in the very foreground of the image. It has a single human human dead-center on its face. The eye itself has a black pupil with a white sclera. It does not possess any eyebrows or eyelashes.

This one appears to be moving rapidly as the image was taken, as it is the most blurry one out of all of them. Going across its front body is a crooked mouth filled with human-like teeth and a tongue. It has dark relatively small dark-red lips surrounding it.

This creature is seen peeking out from behind a trash bin, sniffing the contents of it. The nose on the center of its face is tall and narrow, but not very wide. It has two nostrils always facing downward.

The ear creature can be seen to the right of the image, standing aimlessly. As per usual, it has a single human ear on the middle on its face. The hole of the ear is facing directly forward, surrounded by the fleshy outer ear, which seem to be a thinner and more oval-shaped compared to a normal human ear.

Finally, the last creature has a human hand attached to its face. The hand is connected just below the wrist, and seems to be frantically moving around, trying to grab something. Like the other organs, the hand has slightly more orange skin than the rest of the body. It has five short, but thin fingers.

While little is directly said about their behavior, we can make assumptions about it based on their appearance and description.

It is very likely that the creatures are actually a part of a single hive-mind that somehow connects their senses together, as they would not be able to cooperate together properly if they were separate entities, as they don’t have any way to relay information to one another (except for the mouth, but even then, only the ear would understand). It is also likely that they are supernatural in nature, as their small bodies would make it impossible to have their organs be fully-functioning, especially the mouth, as there would not be enough room to fit all of the internal parts of the organs. It is possible that they have non-euclidean properties on the inside.

Based on the image, they appear to be rather curious creatures, as they’re seen intently taking in stimuli upon encountering the photographer in the alleyway. Another interesting detail is that the nose is confirmed to be sniffing the contents of the garbage bins. This curiosity could mean two things:

The mouth charging towards the photographer seems to imply that it is planning to devour them, based on the information provided by the eye and nose, which could mean that they are hunters which attack small to large prey by biting them once they identify it as ediblee. They could also be opportunistic scavengers, which would explain why one is seemingly looking for something in the trash bin, most likely thrown-away food.

While their size makes them a very easily avoidable threat, they do have fairly good coordination to one another, and could use their combined strengths to the best of their abilities in order to overwhelm you. For example, if you are distracted by the eye or ear, you have a high chance to be grabbed by the hand on your foot, and the mouth will not hesitate to bite you. Attempting to hide or escape is also difficult, as their small scale and heightened senses make them able find you easily, especially in tight spaces. Their hive-mind coordination and their curiosity to stimuli may also be signs of mild intelligence among them. 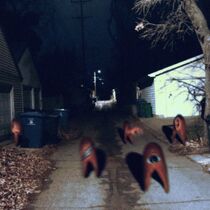 The full image of the creatures. 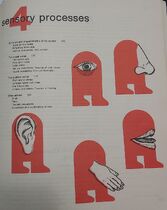 The original page of the textbook that the creatures were based on. 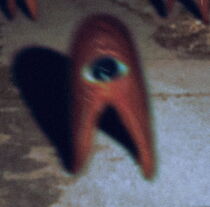 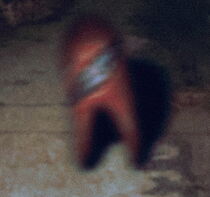 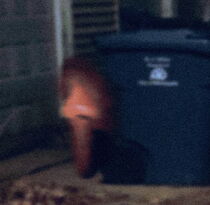 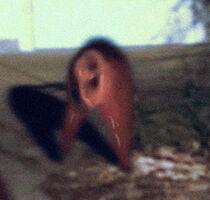 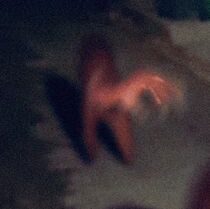