Rowdy is a character by Trevor Henderson he originated from a twiter post in 2019.

Rowdy is a "slasher" who kills people in New York subways during the night. He is quoted to be a psychopath, and his true name isn't revealed. 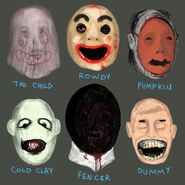 drew you guy some slasher!