3 Kilometers (Possibly more due to being not fully visible)

Remain Indoors is an unnerving creature made by horror artist Trevor Henderson. It is a member of the infamous group of creatures known as The Giants. This one in particular has many similarities to other existing Giants, which may imply that they are related.

Remain Indoors depicts a terrifyingly tall tripodal entity, seen wandering through a vast, empty containment field during sunset. The creature is very thin and its entire body is covered with thick, gray skin. It shares a very similar appearance to The Wandering Faith.

Its general body structure is similar to that of a Sauropod dinosaur, with a long, oval-shaped torso connected to the legs at the corners. The torso itself is merely a fleshy mass without any defining features, but there are a number of extremely long and thin tendrils protruding down from the underside it. Due to the quality, it is difficult to tell exactly how many are actually in the image, but there appears to be at least four tendrils.

It has three extremely long legs legs, two being on the front sides of its body, and one being on the rear end, almost appearing like a tail. They are already very thin, but they get even thinner and thinner as they go down. The legs seem to be very flexible, and seem to lack any bones, but are nonetheless sturdy enough to keep the creature upright and walking.

Finally, the creature's neck, or possibly head is disturbingly long, piercing well above the skyline, sharply bending slightly at a joint similarly to an elbow on an arm. Like the legs, this neck is very flexible, with seemingly no bones keeping it still. It is likely all controlled by muscles.

While there is very little information about this particular creature's behavior, from the caption, we can tell that the creature appears to be relatively harmless and does not appear to directly hunt humans down if they are indoors, which is how it got its name. We also know that the creature has been around long enough for the humans to have created rudimentary countermeasures to prevent it from doing harm.

It is very likely that Remain Indoors is actually a member of The Giants, as evident by its enormous size, strange appearance, and nature of appearing during storms or misty weather. It is most likely a Collection Giant, and uses its many thin tentacles in order to abduct certain worthy humans to ascend to ‘heaven’. This is further solidified by that fact that the creature is unlikely to cause any real destruction due to it’s thin and flimsy stature.

It also has a very similar appearance to The Wandering Faith, so it may be related to it somehow. If this is true, then this creature may actually by the offspring of The Wandering Faith that was seen in another image. In the aforementioned image, it was much smaller, but also had more musculature on its legs. It is possible that the creature eventually adapted to become a fully Collection-based Giant, opting to cause as little harm and destruction as possible.

If it is not the offspring of The Wandering Faith, then its origins would be the same as all the other Giants. It originates from a completely different dimensional space that was somehow overlapped with the humans' dimensional space. This was signified by the appearance of a second Moon, which may have actually been a portal summoned by the Moon Worshippers to allow the Giants to pass through to our world. From this portal, Remain Indoors likely emerged as well.

Due to the creature’s massive size, it is certainly capable of some sort of destruction, but would likely not be as devastating as many other Giants. It can use its legs or tendrils to grab humans or other objects for additional damage. Its thick skin would provide moderate protection from most non-explosive human weaponry.

A possible image of the creature. The creature in this image has been confirmed to be related to The Wandering Faith. 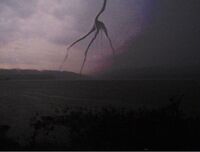