Precursor of the First War

Percursor of the First War

The Precursor of the First War is a gigantic creature made by horror artist Trevor Henderson. It is a member of The Giants, and was possibly the first one to ever arrive on Earth. There appears to be two versions of the creature, with the other possibly being its offspring or successor.

The Precursor of the First War depicts a monstrously large humanoid figure moving along a cold and heavily misted environment. Due to this mist, most of the creature's details are completely obscured, leaving an ominous silhouette as the only way to see it. The height of this version of the creature is comparable to Breaking News.

The torso  of the creature, while not very visible, appears to be rather broad and muscular and has a somewhat large belly. It also has a large chest area, likely due to its ribs. Its posture throughout the images is hunched over with slightly bent legs and stretched arms.

Speaking of the arms, they are much less muscular than the rest of its body. They are human-like, containing a single joint at the elbow, but also reach all the way down to its knees. Where this human-like appearance ends however, is its hands, which have palms that are quite small. They also contain thin fingers with extremely long and sharp claws. The creature only has four digits; three fingers and a thumb.

The legs seem more muscular than the arms and do not posses any irregularities from a human. They are connected seamlessly to the torso, with no visible hip or pelvis that protrudes. It is unknown what the creature's feet look like, though it is possible that they look like those a human, only with sharp claws as well.

The head of the creature is a large round shape that is taller than it is wide. It is also proportionally a bit bigger than a human's head. Not much else is visible from this body part.

A few months after the initial two images were posted, Trevor made another image of a very similar creature, this time not hidden in mist. The two Giants share the same stance, body proportions, and environments. This new creature however, is significantly smaller than the original one.

Its entire body is covered in a dark gray-blue skin. It appears to be very wrinkly and contains a few possible wounds and small strands falling off. Its torso region is very similar to the previous creature, with a large, broad chest and somewhat plump belly.

The arms however, are not as thin and long as the previous Giant, as they appear to have more muscle on them as well. The hands and legs of this creature are not visible in the image, so we cannot verify if it has the same sharp claws as the other titan.

Finally, its head is facing towards the camera this time, meaning we can make out its facial features. Its face resembles that of a rotting old man, combined with some sort of mammal, like a sloth. It has two large eyes that glow white, a medium sized nose, and a small, half-open mouth. The creature also seems to posses an extremely long tongue that it likes to leave hanging out of its mouth.

While not much is directly confirmed about the two creatures, it is fairly safe to assume that they are members of The Giants. If their massive size was not enough of an indicator, they also seem to be able to manifest mist in the surrounding area, an ability that most members of the group posses.

The bigger, original creature arrived on Earth first, via the overlapped spaces signified by a second Moon. Based on the captions given, it may also be the first ever Giant to arrive on Earth, as the humans seem to be extremely unprepared for its appearance. and have yet to treat them as a regular occurrence. This prompted the humans to fight back, which resulted in the first war between the humans and Giants.

Both of the creatures seem to behave in the Destruction Giant classification, as they are seemingly not tall enough to ascend humans. They also have a humanoid body structure, which is exclusive to Destruction Giants (with the minor exception of the Giant Puppeteer). They have also been observed to be aggressive to humans.

The original creature, seen in the first two images was, as the name suggests, the precursor of the first war between the humans and Giants. During this war, the humans were intending to kill the creature, which was the only Giant at the time. They appear to have succeeded, as the caption states that they wished that the creature "may never live again." It lasted for about three years before this downfall of the titan.

Unfortunately for them, many other Giants had already started appearing even before they were able to kill the Precursor. During this time, they still attempted to fight back, but ultimately decided that it was a futile task due to the ever-increasing number of Giants that keep appearing all over the world.

They eventually accepted The Giants as part of their normal lives, and adapted to their presence instead. This is why almost all of the later posts containing Giants have captions that treat and refer to the Giants as minor natural disasters rather than major threats that they needed to fight back against.

This acceptance is seen in the caption of the second Giant, where the people who witnessed it during their road trip were not shocked at the sight of it, only took photos and videos of the creature. They also refer to it as "this one", implying that this was taken during when the Giants had already infested the Earth.

It is unknown what the two similar Giants' relations are, if any. They appear to have similar body structures, environment preferences, and movement methods. It is possible that the second one is an offspring of the original.

While the massive size of these titans are their most noticeable strengths, their extremely long and sharp claws also help in tearing down buildings with ease. These claws can also effortlessly cut through trees and humans alike.

Their glowing white eyes may suggest that they have a better eyesight than a humans, and possibly see in the dark, and the large noses allow them to sniff out any victims that may try to escape. It does not appear to have any ears, however. These creatures have also been described to be fairly fast for their size, quickly encroaching from a forest in the outskirts of civilization, all the way to the middle of the city within a matter of minutes.

While they are immensely powerful, capable of delivering hundreds of thousands of force in their attacks, and have very resilient bodies, the death of the first Giant proves that the Giants are mortal, although incredibly difficult to kill. 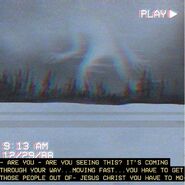 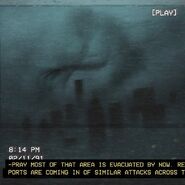 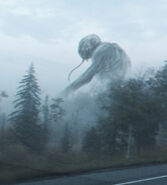