Nurpo is a creature originally made by Jack Stauber but adopted by Trevor Henderson into his work. Nurpo is an odd, small figure of many surprises. Trevor drew the creature to be more unnerving.

Nurpo is a small, pale, humanoid creature resembling a human fetus. Nurpo possesses a red, spherical nose and two large eyes with big black pupils. Nurpo has two, eerily human like ears on the side of its head and a large mouth to tell secrets to the deaf. Nurpo's arms are long compared to its body with nubs instead of hands or feet. Nurpo is small, only being less than a foot tall yet its facial features are relatively large compared to its body. it can also stretch out its body to wrap around heads. Nurpo also appears to have a completely white, pale appearance and has a somewhat big red nose.

Nurpo's main favorite food is coins, that people lost between their couch. It isn't known if it eats anything else. ( This includes milk or water.) After eating the coins, they get turned into dopamine, which is a chemical to make people happy. This is the reason why Nurpo is always happy. It is believed that any kind of metal can be converted into dopamine. But Nurpo prefers coins.

Nurpo is very intelligent. It is capable of human speech and is able to talk to people. However, it doesn't talk to hearing people. The only people it talks to are people that are deaf. If it talks to people that can hear, they´ll forget the conversation. It is a special ability. Nurpo also talks to kids. However, Nurpo's voice would be too heavy for them to hear. So, it doesn't want anyone to know what it is saying. It doesn't want to reveal any secrets. It is doing it for fun. 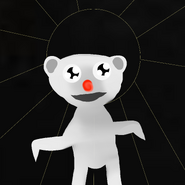 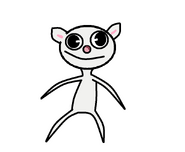 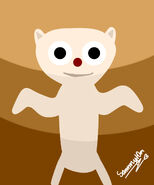