Thank The Night Time Creeps are a pair of disturbing creatures made by artist Trevor Henderson.

The first Night Time Creep depicts human-like figure with an unusual face.  It’s mouth is toothless and wide agape, showing what could be a smile, along with visibly dry and fleshy lips. It’s nose is large and animal-like, with the nostrils being completely visible from a front perspective.

The creature’s eyes are wide open, almost completely revealing one side of each eyeball due to the lack of any eyelids. The eyes themselves are also bloodshot, and seem to be rolling upwards into the back of its head, leaving the irises and pupils barely visible. It is also crying out blood, which is running down it’s face, some landing in its mouth.

Only the head and neck of the creature are visible, as the rest of it’s body is shrouded in darkness. What we do know is that the  creature has wrinkly, dark blue-purple colored skin.

The second creature drawn shows a grotesquely decayed human, likely an old man. It has a round, and almost bald head, with only a few small hairs left. It has two human ears and and a short nose, with what appears to be no nostrils.

However, undoubtably the most unnerving part of this creature is it’s lack of eyes and a wide smile. Both of it’s eye sockets are missing their eyeballs, and one eye hole appears to be much larger than the other, almost as if it was wounded. It has a similar smile to the other creature; large, toothless and distorted. Though, this one appears to be more directly a smile, rather than just an open mouth.

The skin of the creature is a bright, sickly lime green, though it just be the effects of the creature being seen through a night vision camera. We also see that starting from the mouth and below, the creature’s skin appears to be severely decaying an darkening.

Very little is known about these two creatures, as they have only appeared in one image so far, and the only caption provided is “Night Time”, and it is still unknown if they are hostile or not. We can make a few assumptions from their appearance, though.

Given their human-like appearance and tendency of appearing during nighttime, it is possible that they are actually former living humans that have now manifested as ghosts. The first creature’s blue appearance could suggest some form of extreme Livor Mortis (parts of the body turning blue after death), while the second one shows clear signs of decomposition. It is unknown how they died, though it is likely that both of their eyes were targeted, due to their appearance. They likely died gruesome deaths, which would further strengthen their haunting. Ghosts have also been known to be appear quite abstract in the Trevor Henderson universe, which would further alien appearance. 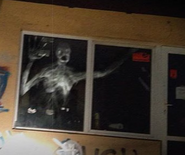 An example of an abstract ghost in the Trevor Henderson universe.