The Misty Guests is a group consisting of three different creatures, drawn by horror artist Trevor Henderson. They are members of The Giants, as evident by their size and misty surroundings. Their fearsome size, grotesque bug-like appearances and eerie tendency to appear in the mist (as their name implies) makes them a truly terrifying trio of titans.

Creating Webs
Eating People and Other Objects
The Mist

Any large misty or foggy area

The Web Kraken depicts a spider or octopus-like creature of epic proportions.

From what we are able to see in the image, it has up to eleven varyingly thick legs that have a single joint that bends surprisingly early on, leading to a much longer lower legs. The appearance of it’s feet are currently unknown (if it has any). It's big thick body is all red.

All of the creature’s legs have a meeting point at a large, oval-shaped epicenter, presumably the creature’s body or head. Underneath this head emanates a strange, red glow. This could possibly indicate where it’s mouth is, or perhaps the part of the body it uses to create it’s signature webs. Strangely, we do not see any sort of abdomen or other body area of the creature besides the head mentioned above, which gives more of the appearance of cephalopod. We cannot know for sure as we are unable to see the full head of the creature, only the underside of it.

Assuming that the signs in the distance is about 20 Feet or 6 Meters, we can estimate that what we can see of the creature is about 177.1 Feet or 54 Meters tall. Keep in mind that this is only the visible part of the creature, and the true height of the beast could be much, much larger.

We assume that all of the Misty Guests are members of the Giants, given their extraordinarily large size and nature of appearing during misty weather. This means that The Web Kraken, like all other Giants, arrived on Earth from the overlapped spaces that was signified by second Moon, which was presumably summoned by the Moon Worshippers. From there, The Web Kraken was free to roam about Earth and cause devastation to all who is unlucky enough to cross it’s path.

Since it is most likely a member of The Giants, we know that it and the other Misty Guests must have arrived during the later period of The Giants, where most of them became aggressive, causing major destruction to properties, killing humans not deemed worthy and ascending worthy humans. Due to The Web Kraken’s height not piercing the skies, and it’s clear lack of flexibly tentacles or tendrils, we can surmise that it is a non-collection Giant whose only purpose is to cause destruction.

Aside from it’s impressive size and magnitude, The Web Kraken does not have any clear abilities that are explicitly told or noticeable. The red underside of it’s head may give us a clue to what it’s abilities are, however.

Given the creature’s spider and octopus-like appearance, it may be able to excrete some sort of substance or material from this orifice, like an ink or web that it uses for offensive and defensive purposes. However, since it is a land-dwelling creature, the latter substance is much more likely. This ability and it’s appearance has given it the namesake “Web Kraken”.

Another possibly that can also coincide with the previous one is that the gaping red hole we see in the image is it’s mouth. This could allow it to easily devour a human, even a large vehicle whole.

An unfinished 3d model of the creature.

The completed 3d model of the creature (Highly Inaccurate)

Eat everything in its path

The Second Misty Guest, unofficially known as The Dread Roach depicts a large arthropod-like entity seemingly moving towards the photographer in a rocky fog-covered beach.

From what we can see in the image, it has large, innumerable, sharp, and bug-like legs that can contain a maximum of four joints. Most of the legs it has appear to have two or three joints, however. The creature appears to posses a total of 11 visible legs, of course, there are most likely many more legs that are not visible in the image due to the location of the creature.

All of these legs are connected to a singular massive body that has the shape of a very small and lumpy mountain, getting much wider and more massive the further down it goes. It’s entire body region is a conglomerate mass of whatever material the creature is made of, whether natural or not. Though, it is most likely soft and fleshy due to having many visible lumps.

The creature’s large body shape and many short, spiky legs gave it it’s namesake “Dread Roach”, due to appearing similarly to a cockroach. Despite it’s neck being almost completely absorbed by it’s body, it does still have a surprisingly defined head, with what seems to be two large eyes or eyelids bulging out from the top of it’s head.

Comparing it to the rock closest to it, which is about 5.57 Feet or 1.7 Meters tall, is about 15 times the height of it, accounting for distance. From this, we can estimate it’s height to be around 83.5 Feet or 25.5 Meters.

Like all other the creatures in the group, we cannot see any of the colors or distinct details of the creature due to only its misty silhouette being visible to the camera.

As stated earlier, we are assuming that all three of the Misty Guests are members of The Giants, therefor, they originated from a second Moon that brought them to Earth to wreak havoc. When it arrived on Earth is still unknown, whether before or during the Collection period of The Giants where most Giants became aggressive to humans, ascending or killing them based on sinfulness.

We can see from the image in question that it seems to be headed straight for the photographer, likely wanting to kill or devour them, suggesting that this creature is much more directly malevolent than the other Giants, since this behavior has not been observed in any other Giant. This would put it into the second category of Giants, which is the Destruction Giants.

The creature’s impeccable size is definitely an asset of it, however it may also be a setback for the beast, quite literally. It’s extremely massive size and odd shape, coupled with it’s relatively short legs would likely force it to move quite slowly.

It may also use this setback to it’s advantage, acting as a sort of wall or blockade, forcing people to confront it and most likely get eaten. This is especially true for the environment that it likes to wander around in, namely areas with large rock formations.

As seen in the image, the creature’s legs are very sharp, allowing it to easily impale a human being or a car, where it would then pass the carcass from leg-to-leg until it reaches its mouth.

Since the creature is very bug-like in appearance, specifically a cockroach, it may also have some sort of exoskeleton covering it’s body for additional protection from most weaponry. Following the cockroach route, it may also be ably to fly with hidden wings, which would negate it’s issues with the issues of speed explained earlier.

Likely the types of environments the creature roams. 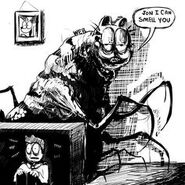 Gorefield, a non-Trevor Henderson creature that it has been frequently compared due to visual similarities.

Misty Guest Three or Twenty-Twenty-Seven (2027 for short) depicts a terrifyingly tall hexapodal (six-legged) entity standing far beyond a small lake and over a cityscape. The creature’s general body structure is relatively similar to that of a human, however there are also many things wrong with it’s appearance, namely it seemingly walking like an animal. It is also quite skeletal and thin in appearance.

Starting with the limbs, it has a total of four, thin hind legs that have all two joints. The two very back legs are straightened, while the other two legs in front of it are slightly bend in opposite directions. On the lower part of the creature’s shoulders are two additional forelegs, possibly arms that have three joints each and seem to support the weight of it’s upper half, giving a similar stance to a gorilla,

The back of the creature and the top of it’s head are lined with many strange growths or plates that appear to be quite tough and solid.

The creature’s entire details and colors are not visible due to the mist surrounding it, only revealing a dark gray silhouette. What we can tell about the creature is based off of it’s shape.

The height of the creature is difficult to tell due to the lack of nearby clear objects to compare it to, however we can see that it appears to be standing over strange structures of some kind, most likely buildings and skyscrapers, the tallest of which seems to be eleven times smaller than the creature. Since the average skyscraper is 150 Meters/492.12 Feet, then we can estimate it’s height to be a whopping 1.65 Kilometers/1.25 Miles, easily being the largest of the trio, as well as compared to other Giants.

As explained earlier, the Misty Guests are believed to be members of The Giants, meaning that they arrived on Earth via a second Moon that was overlapping the spaces between the Giants' world and the humans'. 2027 in particular was likely summoned before the period where most Giants became hostile and started collecting and killing people based on their worthiness. We can make this assumption due to the birds that are seemingly flocking around it, which was observed in other Giants that were peaceful at the time, like The Bird Watcher, though nothing is confirmed.

Being a humanoid Giant with many protective and offensive capabilities, it is safe to assume that 2027 is under the behavior class of Destruction Giant, although it may also be able to ascend worthy people to 'salvation' using its enormous height and long arms. People not deemed worthy to ascend would be quickly snuffed out by being crushed by the titan's massive legs or the buildings it collapses.

Since it is a humanoid Giant, it also tends to wander around city or town areas, unlike other animal-like Collection Giants who prefer to wander in more rural areas. We presume that it uses all six of its limbs to walk, almost like an insect, which makes it a rather speedy creature.

The creature’s absolutely enormous size and many limbs means that it is a beast clearly capable of destruction. It also appears to be tall enough to able to pick up worthy humans in order to deliver them to the Heavens. The creature’s plan of attack would be similar to other human-like Giants like Breaking News and Tree Head, which would consist of enraged stomping, grabbing and swiping with it’s numerous limbs. It would also be easily capable of destroying buildings just by grazing them. The many strange plates on it’s backside may cover it’s underside as well, which would provide good protection from many known human weaponry. 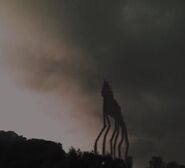 A fan-made image of it, supposedly after causing a forest fire, 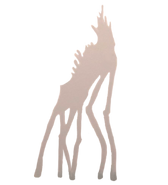 Transparent image of the creature.

What the creature may look like in 3D. (By Joelías_N1 on Steam)