Black (if the holes are counted as eyes)

Cause trouble and manifest holes across the narrator's house.

Spreading Holes around houses
Causing trouble and making a mess of holes.

It looks like to be a white, bald humanoid but with black, seemingly oozing holes all over its body. the face is covered in dark holes like the rest of its body, however it lacks any facial features as i it never had any and seemingly doesn't have any ears. the creature itself stands on two pointy stubs and seems to not have any hands. its left arm appears to have a large hole in it, resulting in the upper left arm to seemingly float in place where it should be, seemingly as if a part of its arm is invisible. We can see what is most likely a form of liquid dripping out some of its holes, primarily on its chest and face. its gender has been unconfirmed but is presumed male due to the name it was given "The Hole Man". So far there are 20+ holes and gaps on its body that have been counted and if anything it most likely has many more holes all over its body.

Not much is known about The Hole Man, all that is known is that it may currently reside in the narrator's house, spreading strange phenomena and causing trouble, according to what the narrator said, the creature had caused a little "tight cluster of holes" to appear on the walls, they were deeper than what should have been possible, despite being small and tight, this was only a partial beginning of a strange phenomena, presumably the creature's sightings by the narrator around the house, it is implied that the holes could have spread around to unprecedented amounts, which may have caused strange and elaborate trouble, and it is believed that the holes may have spread to even further levels, though this still isn't confirmed as for now. 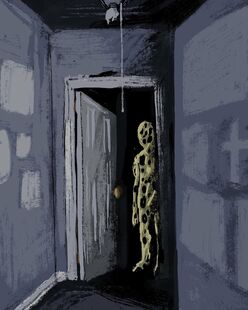 An illustration of the creature peaking from a doorway
Community content is available under CC-BY-SA unless otherwise noted.
Advertisement