Hands Being Cut Off

The Hokkaido Hands (previously known as The Forest Hands), are a group creature(s) made by artist Trevor Henderson.

The Hokkaido Hands depict numerous human-like arms reaching out from behind or beside the trunks of different trees in a forest, complete with hands containing five fingers, as well as proper joints. Most of the arms are very thin and bony, almost seeming malnourished.

They also appear to be smaller than an adult human arm, so they may actually be the arms of a child. The color of the arms cannot be exactly seen due to the photo being shot using a night vision camera, however we can tell that they are of a light skin tone.

In the image, we can see eight arms in total, all in varying lengths; with some being much longer than others. They are also in different positions, as most of the arms are only visible by their fingers.

Very little is known about this creature or group of creatures aside from the caption given, which states that they are supposedly related to a disappearance and were sighted in Hokkaido, Japan. The tape was also found over 12 Feet off the ground and taken during very early in the morning during June 30, 1994.

Another similar creature that may give us a clue to the behavior and abilities of the Hokkaido Hands are The Arms In The Vent (abbreviated to TAITV).

TAITV, like The Hokkaido Hands are also a group of human-like arms reaching out of dark spaces. TAITV are also confirmed to be hostile, hunts humans, and eats it’s victims, so it stands to reason that The Hokkaido Hands would also be of a similar nature. This is further backed up by the supposed disappearance of the cameraman of the tape, and that the camera was likely grabbed up to the trees, 12 Feet above the ground.

This theory suggests that The Hokkaido Hands were a group of approx. 8 or more children that went to camp in the deep forests of Japan, specifically, Hokkaido, but had happened upon and irradiated area. The children went to investigate this very radioactive area, which the radiation could be probably coming from an probably gigantic fire, emmited by the immense amount of fire there, but began to amalgamate into a single being with multiple of the same body parts. After which, they needed to hunt humans and other animals in order to survive and possibly evolve.

The Arms In The Vent, a very similar creature to The Hokkaido Hands.

A possible image of the Hokkaido Hands. 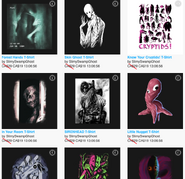