Hiding, asking people to stop a minute, people that stop for him

People not stopping for him

Behind a fence in a dark wooded area

Hey Stop A Minute is a disturbing creature drawn by artist Trevor Henderson.

(It is frequently mistaken to be called Hey Man Stop A Minute.)

This creature in the image appears to be eyeless, with an unusually large head disproportionate to the size of its body. It has dark-brown, wrinkly, veiny skin that covers its entire body. Due to its location in the image, the limbs and lower half of the creature remains to be seen (If it has any, that is).

It’s head resembles that of an old man, however, it is missing it’s eyes, leaving only large, empty eye sockets. It’s mouth is open as if it is speaking and it’s lips are dry and fleshy. It also has a large nose and ears.

Comparing it to the fence and trees surrounding it, we can estimate it to be around 10 Feet or 3.048 Meters tall. The length of the rest of it’s body is still unknown. Due to the creature’s appearance, we presume that it is male.

Not much information is known about this beast, but we can deduce from the caption that it wants someone or something to “stop a minute”. This communication suggests that it has human-like intelligence that allows it to speak this message in perfect English.

The caption (which represents the creature’s speech), repeats this message multiple times, implying that the recipient is ignoring the creature’s message (whether intentionally or not) and it is repeating it to get their attention.

Another interesting detail is that the beast is hiding it’s lower half behind a small fence in a secluded forest, as if it doesn’t want anyone else to see what it will do when the recipient actually stops. This suggest that it will do something violent with the people/person that it allured with it’s voice.

Another possibility is that the creature doesn’t actually have it’s own voice but is mimicking a voie or conversation that it heard in order to attract people’s attention, similarly to Siren Head.

Another creature similar to it, also standing behind a fence. 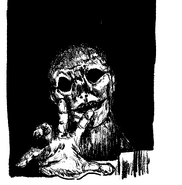 A picture of the creature made by Fenrir74.