Hedorah - creature from the Godzilla universe that was redrawn by Trevor Henderson.

Neutral (In some subsequent films, it is agressive)

Eating all kinds of pollution, taunting the enemy (possibly)

Feelings of pain and danger.

Image of the redrawn Hedorah, appeared on Instagram on December 12, 2019 with the caption "It’s your favourite sewage kaiju, Hedorah!!"

The Hedorah looks like a huge, elongated creature, which instead of skin is muddy-colored mud, has short, thick legs and long, thick arms. The white of the eye is colored red, and the pupils are wrapped in black with a yellow cord. Most of the Hedorah sounds are bubbling with mixed wheezing. There is also a long tail in the inaccessibility of visibility.

Hedorah has animal instincts and a will to survive. Therefore, all the destruction of cities that take the lives of people is just an accident, which mainly occurs due to its bizarre biological properties, but when it feels danger, it can become quite aggressive, thereby trying to defend itself. His diet includes any kind of contamination. However, he may have some part of his mind, since in the film "Godzilla vs Hedorah", when he first meets Godzilla, he responds to ridicule and, it seems, even imitates his gestures, and during the final battle of monsters, Hedorah even laughs, choking Godzilla in the mud so his mind is rather controversial, as in some of the following Godzilla films, Hedorah deliberately inflicted pain.

In the series, Showa Khedora was an alien life form from the Dark Gas Nebula in the constellation Orion that landed on Earth, traveling on a comet for at least 243 light years.

In Godzilla: Final Wars, Hedora was one of the many monsters controlled by Xylien, but his origins and how he came to Xylien's control are never explained.

In the IDW Publishing Godzilla: The Ongoing comic series, Hedora is an alien monster who came to Earth with fellow aliens Gigan, Monster X and SpaceGodzilla to wreak havoc.

Hedorah, when it hit the ground, was not initially huge, but then it gradually began to grow and eventually became a final stage, for survival, etc.

It is the smallest stage of Hedorah, looks like a tadpole and is 0.1mm in size.

This stage comes from the microscopic stage. During this stage Hedorah can only swim and therefore he cannot get out on land. There are small spines on the sides of the head, and most likely has the shape of an eel-like body, its length is 20 meters.

After the water stages, the land stage occurs. Outwardly it looks like the final stage, but only has shorter arms and lower, namely 30 meters.

Occurs after the land stage. This is the only stage of the Hedorah that can fly fast, but has little agility. The body shape of the stages resembles that of an elongated stingray at a length of 40 meters and 20 meters in height.

The final stage is Hedorah, its height already reaches 60 meters.

Acidic properties - He can throw his acid pieces of bodies at his enemies.

Combining abilities - Hedorah can combine with other Hedorahs to become larger, or divide into multiple smaller Hedorahs.

Eye laser - Hedorah can shoot red lasers from its eyes, which are capable of setting fire to opponents of buildings and other objects.

Sludge attacks - It has been shown that Hedorah can also release massive amounts of silt and mud without affecting its size in any way.

High protection - His body is very resistant to any kind of explosions, fire and nuclear breath, and ordinary weapons such as a machine gun and a shotgun passed through him. If it breaks into small pieces, they will become mini Hedorahs and will gather back into a 60 meter monster. He also has toxic blood that can dissolve any body, but at the same time because of this, his eyes are constantly suffering, and therefore when his eye begins to bleed, Hedorah closes his eyes to prevent them from damaging him.

Sulfate properties - in its flying form, it was also able to fly, and spread a mist of sulfuric acid as it went along, and in its final form it could revert back to its flying form at will. Hedorah does not require oxygen to survive, but rather thrives on inhaling toxic pollutants. The byproduct of Hedorah consuming these pollutants is a highly concentrated sulfuric mist, which is capable of corroding any metal and completely disintegrating organic life. 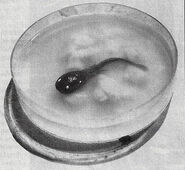 The initial or microscopic stage 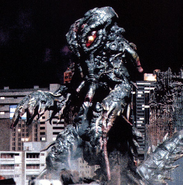 https://godzilla.fandom.com/wiki/Hedorah#Abilities - The full information about Hedorah