The Giant Puppeteer depicts a tall, skinny, human-like creature with light-blue skin. It appears to have the head shape of a bird, but it does not posses any facial features. It appears to have a small prick at the end of this 'beak', which may be some sort of proboscis.

It’s entire body, including its arms and legs are rather long and skinny when compared to the proportions of a normal human, as they appear to be able to reach all the way down to the creature's knees. They also appear to have three joints each, rather than the usual two. The arms connect to it’s surprisingly tiny hands, which seem to be webbed, like a duck, and only has four digits each. These digits, although short, have extremely sharp talons.

The body of the creature also appears to be quite skinny, so skinny in fact, that you can see the creature's rib cage, making a mark on the light-blue skin of the monster. The stomach of the beast is also seemingly inverted, getting thinner rather than thicker at the abdomen. It also has somewhat large hips. Its legs seem fairly normal, if not a bit skinny.

On it’s left hand is what looks to be a human or a puppet attached by string (most likely appendages), where it almost seems like it is being controlled like a puppet, hence the creature’s name.

The Giant Puppeteer is very likely to be a member of The Giants that we see in Trevor’s other works, given that it is about a hundred feet tall and seems to collect humans. Since this is the case, then it would have arrived on Earth from an overlapped dimension via the summoning of a second Moon, as told in the caption of the Tendril Giant.

This is further evident by the caption of the post, saying “When the time came, it wasn't in the way they'd thought, both in origin and destination.” likely referring to the humans’ reaction to the fact that The Giants (the aforementioned origins) were actually the means of sending people to Heaven (the aforementioned destination).

This Giant in particular is either a Collection Giant or a Destruction Giant, but we do not know which one it truly is, as there is evidence pointing to both behavior types. The caption, combined with the creature's unusual ability to conjure strings would make it seem like a Collection Giant, that uses these strings to ascend people to 'Heaven', however it is also a short humanoid Giant, which indicates that it is a Destruction Giant. It is possible that it exhibits both behaviors at the same time, killing the unworthy humans and ascending the worthy humans.

Like the other Giants, The Giant Puppeteer can cause mass destruction and devastate civilization using it’s enormous size. Also like other Giants, the uses it’s string-like appendages to grab any unworthy humans that happen to be nearby. After this, it appears to control the victim like a puppet, using it to lure in other humans.

Judging from the caption, it may also use these strings to collect and bring nice people up to the heavens, similar to other Giants. Any humans that are left who were not worthy are killed or turned into puppets by the Giant to control.

It’s main ability to use humans, whether alive or not, as puppets to use for it’s advantage suggests that it may have some sort of intelligence that allows it to know how a human would move and act in order to lure other people in. 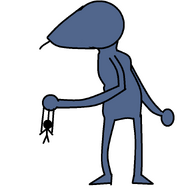 The Giant Puppeteer Chibi made by Catherine the midnight.

What the creature may look like in 3D. (Made by Joelías_N1 on Steam for Garry's Mod)