Trevor Henderson Wiki
Register
Don't have an account?
Sign In
Advertisement
in: Unconfirmed Names, The Giants, Fire Creatures,
and 16 more

The Fire Giant is a gigantic creature made by Trevor Henderson. His unique elemental abilities makes him stand out among the other Giants.

The Fire Giant is a gigantic humanoid creature with many scorch marks strewn across his body. His arms are relatively short and deformed, with one being slightly longer than the other. Its fingers are short and stubby.

Its shoulders are very different in proportion. The creature's skin seems to be thick and dense and covers its great magnitude, giving it a featureless, blank face.

Due to the creature's lower half being hidden behind a barn, it is unknown what the lower extremity looks like. It is also unknown if the scorch marks are part of the creature's anatomical structure or if these are wounds received in the barn fire.

The creature is massive, as shown in the photo. The barn is barely half as tall the creature, which can be used to estimate that it is nearly sixty feet tall.

Another drawing of possibly the same creature was posted by Trevor Henderson in January 20, 2021. In this image, the creature's appearance differs, given that he his arms are slimmer and that his shoulders are larger and more jagged. He also has wider hips and a noticeable lack of scorch marks.

Another image of the creature was created by Trevor Henderson on December 25, 2020, showing him in the exact same location and position, but with Christmas ornaments strewn around his body.

It is unknown if The Fire Giant belongs to The Giants, a group of similar entities of enormous magnitude. However, based on his appearance, it can be guessed that he is, in fact, a member of The Giants. This also means that the creature arrived on Earth via the summoning of a second Moon, but it is still unknown whether or not he arrived before or during the aggression period of The Giants,

A notable feature is that the creature is much smaller than other Giants like The Wandering Faith and Remain Indoors, and does not appear to possess any bodily appendages.

From the caption given, we can see that he is most likely a malevolent being, given that he probably intentionally burned and destroyed a group of people’s barn. If he is a member of The Giants, then this gives us more proof that he is a Giant that only kills and destroys sinful people, and does not interact with worthy people. The real second image of the creature backs up this theory by showing us a person watching over the Fire Giant as he destroys the person’s home town, seemingly sparing the person.

Aside from it’s sheer size, the great fires that he can spew from it’s body is easily capable of destroying buildings and killing humans. The fire is also said to have come out of a hole in his chest, meaning that the creature’s innards are made of fire and, therefore is immune to burning himself.

It is still unknown if the hole in his chest is a result of injury, whether self-inflicted or not, or it can manually open his chest cavity as a function to cause catastrophic damage. Though, the former is more likely, given the caption stating that the holes in it’s chest were spreading on their own. If this is the case, then it is all the more dangerous and could possibly even imply that the creature has a regeneration factor of some sorts to allow it to repeatedly open and close holes in it’s torso region.

From the holiday celebration of the image, a reply that Trevor made in a comment could also suggest that the creature somehow has knowledge of holidays and traditions celebrated by humans, as it is said to have covered himself with red and green festive lights for the season. 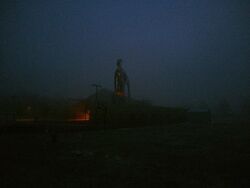 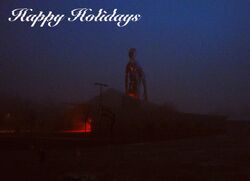 The Fire Giant celebrating the holidays. 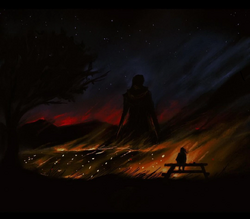 “The killing moon is playing on the speaker you brought, the sort-of broken one. You’re sitting on an old picnic table set up at the edge of the jagged cliffs. It’s night, and below you the town is spread out, glittering and burning. Down there, a mountain is walking.” 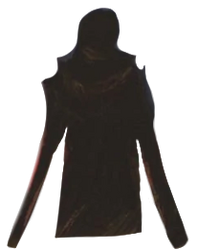 A transparent PNG of the second image (brightened) 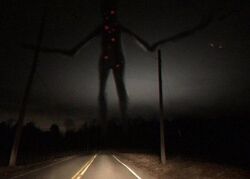 The Giant with Red Dots, another Giant similar to it.