Fan Art is a creature made by artist Trevor Henderson.

Fan Art was based off of the creature shown in Shen Comic's comic that he posted in a response to Trevor's image of Yo Yo.

Fan Art depicts a fleshy creature that somewhat resembles a distorted humanoid-like creature. It possesses at least three, long and fleshy arms which it likely uses to move and attack. It has a small, thin torso that is connected to its unusually long neck. The creature appears to lack any legs, instead having small tendrils where the legs should be. It is covered in pale skin which has small residues of blood.

The most important detail of the creature is on his head. It does not have any facial features, instead having the words "Fan Art" engraved in it’s face. It is unknown if it is carved onto it’s face or simply written on with blood.

The caption confirms that the creature is male.

Based on the picture shown, the creature lurks in abandoned areas of buildings, where it presumably looks for victims. It is unknown what it does to them.

The comic Shen created including the creature, in which the creature was redrawn by Trevor after a while. 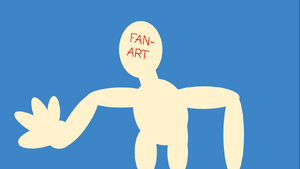