Being Broken
People Escaping It

Dollsbody is a strange and rather unnerving creature made by horror artist Trevor Henderson. Its small size and ability to disguise as a hanging doll allows it to stealthily pounce on unsuspecting urban explorers that dare enter its lair.

Dollsbody depicts a small porcelain doll with a long human-like arm piercing though it. The creature seems to have been discovered in an overgrown basement area in a dilapidated building.

The porcelain doll is rather simple in design, only being a head and neck with a large piece of red fabric all around it, placed just below the neck to give the appearance of a full-body dress or cloak. This fabric is very thin, as a simple flashlight shine easily through it, revealing what's underneath.

The head of the doll is pure white, although seems to have some stains and smudges on it. The face itself seems to depict a female person who is slightly chubby, as it has a double-chin. It also has a somewhat large nose, partially open mouth with bright red lips, large cheeks and a human-like eye in its eye socket. The porcelain overall seems to be cracking, likely due to the arm that is busting down its face, making a hole through a the doll's right eye.

Speaking of which, the arm itself appears to be a very long and disfigured human arm, which pierces the right eye of the doll, then goes down its neck and out from under the dress. The arm is extremely thin, seemingly having skin down to the bone with no musculature, and is several feet longer than a normal human arm. It has dark, decaying skin and is covered all over in small wounds and markings of blood. The hand is more akin to normal human, if not for the fact that it only has four digits and posses extremely sharp claws at the end of these digits.

The true length of the arms is currently unknown, but we assume that it is at least slightly longer than what we see in the image. What is on the other end of the arm is unknown. The arm also visibly bends at least five times before it ends on the hand.

Only small tidbits of information have been given to us regarding this creature's behavior and origins, but there are theories we can make about it.

What Trevor has confirmed about this creature is that it "swings and launches itself using the arm coming out of it's head!". This implies that the doll itself is the creature, and has full control over the arm. This is its main mode of locomotion, using it to grasp and swing around.

What its motives are, are currently unknown. There is also no confirmation if it is hostile or not, although the sharp claws on its hand suggests that it is. It may simply hunt for food, but there seems to be no visible digestive organs on the creature. The more likely answer is that it hunts for either sport or revenge, which will be explained in the theories below.

This theory suggests that Dollsbody is not just a creature that appeared from the Void, and rather a vengeful creature with a complex origins. The porcelain doll that serves as the body of the creature may have actually been owned by someone before, but was eventually abandoned or disposed of, likely due to it breaking or the owner growing old. The intense hatred of the doll for being abandoned may have manifested itself and gave the doll life, changing its appearance.

While this theory may seem far-fetched, emotions have been known to manifest into creature before, such as Good Boy, Chicken Ghost, and The Old Detective. The idea of a once-friendly creature becoming vengeful when abandoned was also used by Trevor once again for Mr. Bag.

This theory is similar to the previous one, except is suggests that the owner of the doll is actually the one haunting the doll as a ghost, rather than being an entity manifested by the doll being abandoned. This would make sense, as ghosts in the Trevor Henderson mythos are very prone to haunting objects, and also take on much more disturbing appearances than their original human form.

The small size of the creature allows it to be a very stealthy hunter, especially since it tends to stay in dark areas. It also moves extremely fast due to its ability to crawl, swing, lunge and climb using its singular hand, as it does not need to worry about weight. It may also be able to retract its arm into its body, which allows it to disguise as a seemingly normal doll, lunging out at whoever gets close.

The sharp claws of the creature will be able to cause serious wounds to the victims, especially since they will likely be attacked without warning. These claws could also be used to latch onto walls, or even the victim's flesh.

The size of the creature, while certainly an advantage, is also a weakness. A quick-thinking person would be able to grab and subdue the arm very easily, and maybe even break it since it appears to thin and brittle. The same goes for the body of the creature, as it can be smashed with relative ease due to being made of porcelain. 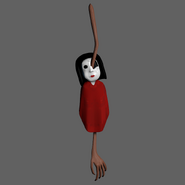