Breaking News is an unnerving creation from horror artist Trevor Henderson. His iconic twisted appearance, menacing size and overall mystery has lead him to become of of Trevor's most popular Giants, next to The Wandering Faith.

Breaking News depicts a terrifyingly tall creature with a vaguely humanoid appearance, although somewhat twisted and disfigured. Its entire body is covered in what appears to be jet-black skin that has difficulty reflecting light off of it. This strange skin encompasses the creature's whole twisted body, head-to-toe.

The legs and torso of the creature is rather similar to that of a human's, just without certain features like hair. It does appear to posses a slightly thin and possibly malnourished physique, as some of its ribs slightly make a mark on the creature's sides and the legs seem quite thin and short, when compared to the proportions of a person, that is.

The creature's arms are also hairless and covered with its strangely-colored skin. However, what makes this creature's arms unique is that they actually reach all the way down to the ground, covering most the height of its entire body, making a stark contrast between its short legs. These arms also seem to be much skinnier than even the beast's legs, but it does have slightly large forearms.

Finally, the most iconic and interesting part of this Giant is its crooked head and twisted neck. The neck is a few times longer than it should be, which makes it bend slightly backwards and forwards in any direction, which leads it to have its infamously crooked head, always leaning and drooping downwards. The head itself is also completely featureless; no mouth, eyes, ears, hair, nose or anything.

The behavior of Breaking News is not very well-known, as Trevor has actually given us very little information about it, aside from the two images of the creature, which don't have very informative captions. But due to it being confirmed to be a member of The Giants, we can however make assumptions on its behavior based on what we know about other Giants.

First of all, Breaking News is almost certainly a Destruction Giant. The creature is not nearly tall enough to pierce the skies and bring worthy people to salvation. It also does not posses any extendable tendrils or strings which would help it do the aforementioned task. It is also noteworthy that it is a humanoid Giant, and Giants of this body type are almost never Collection Giants.

Since this is the case, we assume that it merely wanders about, looking for any cities or human settlements it can find in order to destroy it, and kill any people it deems sinful or unworthy, while sparing the rest to be collected by other Giants like The Wandering Faith or Remain Indoors. From the images we've seen of it, the creature seems to prefer to stay still in one place for extended periods of time, almost looking at rest, unlike other Giants who were photographed while on the move or doing something. The reason behind this strange behavior is unknown. It is possible that the creature is actually asleep during these images, which would make sense since it would be easier to take a good picture of it when it is sleeping. This is further backed up by the fact that all the images of it are taken during nighttime.

Whether or not the creature requires other sustenance like food and water to survive is unknown, but it is unlikely that it does since most other Giants do not display any reliance on necessities, nor do they seek them.

The creature’s massive size would easily allow it to cause mass destruction on a city-wide scale, especially since it has human-like hands to grab people or to demolish buildings. Its humanoid body structure would also help it to be a rather fast creature when running. It could also crawl on all fours for additional speed, though it seems it prefers to walk as a biped. Its jet black skin would also somewhat camouflage it with the night sky, hiding the creature in plain sight while it is asleep.

Like most Giants, this creature is able to function properly despite not possessing any eyes or other normal senses, so it is possible that it also has some sort of additional supernatural or enhaced senses. This may also imply it has some sort of echolocation ability.

There is a theory which suggests that Breaking News and The Giant With Red Dots are actually the same creature. If this is true (which is very likely, given the numerous similarities they share), then Breaking News would also have the capability to create red glowing lights on its torso to further disorient its victims, which would make it a great way to stun and distract a victim's mind.

Another image of the creature, this time its head is leaning to the right. 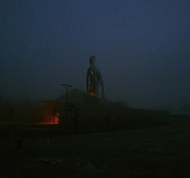 The Fire Giant, another similar Giant.

The Giant with Red Dots, yet another very similar Giant, and possibly even one and the same.