None
Bonesworth is a creation of Trevor Henderson that has only a sliver of lore to it which makes it very mysterious.

Bonesworth is a skeletal being that is missing the lower half of its skeleton. The creature's skull is toothless and made up of two parts, the first noticeable one being a type of shell or plate that covers up its actual skull. The plates appear to be a creature skull, split in half and resting on its regular one. now on to its actual skull. Inone of the four known photos of Bonesworth, the inner skull can be seen. With further examination, a crack on its inner skull that forms a cross can be seen on its forehead between its eye sockets. The creature has oddly elongated arms that he seems to walk with. It could be a ghost, a failed experiment, or possibly both. He also seems to only want to attack people who either have recently done something wrong or mean, if they are a criminal, or if they hurt bonesworth. He is aka counterclockwise jack

Nothing is known about the personality of this creature except for when a user on Twitter stated that Bonesworth is adorable. Trevor Henderson replied "he is a good boy." which could be a joke (and most likely is) or not. Nothing about that statement is really official at this point in time. Except for a post of a message on a Polaroid with a picture on it of Bonesworth with the words "Keep away Bonesworth." It can be seen either on the Polaroid border or the comment section of one of the posts of Bonesworth.

On Trevor's Tumblr, there's a lot about his personality. After getting a random text on your phone (from an unlisted number) he appears, sometimes in comical ways like that of a sitcom, and never leaves. Actually, if you look up the Bonesworth tag on Henderson's Tumblr, he's answered questions about Bonesworth and has actually provided quite a bit of information about him. Trevor used the words "positive" and "inquisitive" to describe him. There are a few other things as well, and I don't really understand why people don't look at his Tumblr more, as it has quite a bit of info on his characters that aren't on his other social medias.

It's also said that when he is close getting close to you, you can hear xylophones playing, possibly a reference to the spooky scary skeletons. 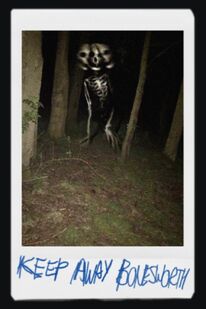 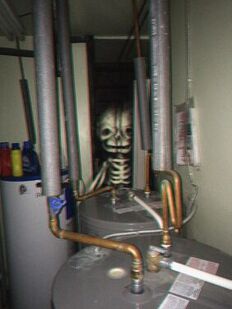 Bonesworth being spotted in the basement. 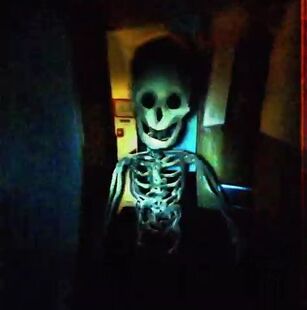 Bonesworth from David Romero's video, but his funtime his is close at the a cop 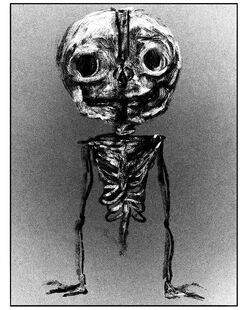 A drawing of Bonesworth (Jumpscare) 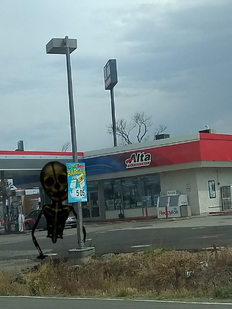 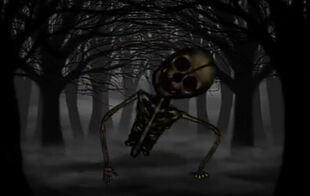 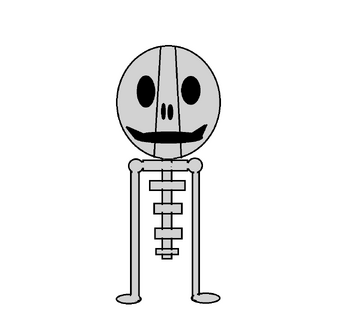 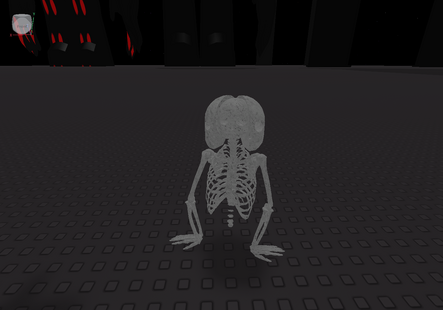 Bonesworth Model made by Darb000 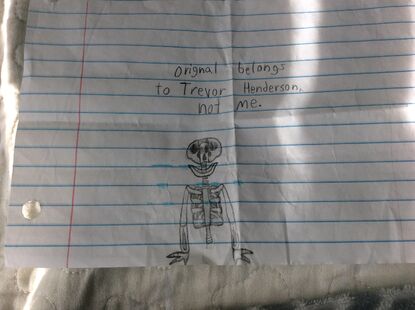 A long while after a fan/friend of Trevor Henderson made an animation of a bunch of Trevor's characters and one of them was Bonesworth and it showed the "skull shell" was repeatedly "shedding". it is unknown if this is canon, but if so, another question arises: why does it do this?

Trevor Henderson once posted a picture of a skeleton and a black tall goat with the caption "Death and the Devil Say Hi" with Death having alot of similarities to Bonesworth, mostly the skeleton, shedding-like skin and no legs. Its possible this "Death" could be Bonesworth and is a Grim Reaper-Figure.

It is summoned with a certain popular mobile game that has its name in it.

He latches onto his "favorite" and is near impossible to get rid of.