Body-Of-A-Pig is a grotesque creature drawn by artist Trevor Henderson.

Body-Of-A-Pig depicts a large, deformed humanoid creature that seems to be charging towards the camera. It appears to lack any legs and walks with it’s unusually long and thin arms, not too dissimilar to Bonesworth. It’s torso is small, flat and appears to be melting or separating where the legs should be. It’s entire body is covered head-to-toe (Hoof? Fingers?) with pink, wrinkly skin that is darkening in some areas, suggesting some sort of decomposition has occurred.

The most notable part of this creature is it’s unnerving, pig-like head. It has crooked eyes facing different directions, a large mouth, a typical pig’s snout, floppy animal ears, and a thin, almost malnourished appearance. Due to it’s wrinkly skin, the head also slightly resembles that of an old man.

This creature in particular is inspired by a video released in 2007 of what was supposedly a real EVP and image of a ghost saying “I have the body of a pig. Oink oink oink.”, hence the creature’s name and the caption of the image.

From what we can gather from both the video and the image by Trevor, the creature prefers to wander in or around abandoned buildings and that it has the ability to speak, usually to taunt or frighten it’s victims. This suggests that it could have some form of human intelligence, which, given its vaguely humanoid appearance, might mean that it is not entirely just a ghost of a pig.

Very little else is known about this creature besides it’s appearances and it’s signature phrase.

Given the creature’s status as a possible ghost or some other supernatural entity, it is very likely that the creature is able to phase through walls, levitate, as well as possibly manifesting in different areas. In both instances, the creature seems to move and balance just fine, despite its lack of legs and its “hands” not connecting with the floor.

Additionally, creature photographed in the video is quite different from Trevor’s illustration, being more of a human-like wraith than pig. This suggests that there may be different creatures that speak this phrase, or that the creature has the ability to shapeshift or has different forms. The shapeshifter theory may also be backed up by its signature phase, specifically noting that the creature is saying that it “has the body of a pig”, implying that it does not normally have the appearance of a pig.

Besides its supernatural abilities, its physical attacks may include biting, punching, ramming and grabbing. Since it may have the combined strength of a pig, flexibility of a human, and special abilities of a ghost, this creature will be a particularly difficult threat to flee from, let alone neutralize (which is a task yet to be done or even known).

Body Of A Pig
“Body of a pig”, the video that the creature is based on.

The creature running towards the camera.

A fan-made full-body illustration of it. 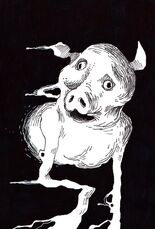 The sketch of the creature by @CPSstuff in Twitter. 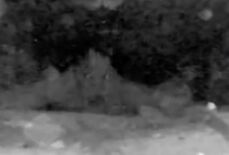 The creature photographed in the original “Body Of A Pig” video. 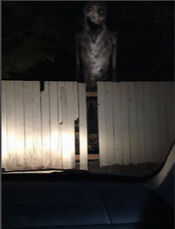 The Fence Observer, a similar creature.