August 2018
Anxious Dog is a creature created by Trevor Henderson. Information is scarce or barely found about this Cryptid.

"The Anxious Dog" despicts a creature that is white in color and doesn't seem to have any eyes, with rather human-like teeth. The creature's lips also seem like that of humans, although with exaggerated color. The creature's lower body hasn't been seen in any of the photos taken of it, but one could assume that the lower body is just as thin and malnourished as the upper body. Its arms are long, seemingly as tall as a person, while its hands and nails remain human-like. 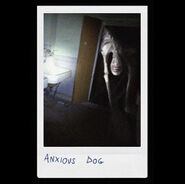 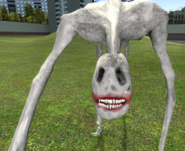