Alien Ghost looks like a visible mutant ghost. We cant really see the lower part of the body. 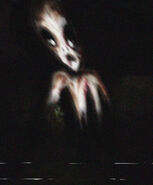 A Bloody Version of the Alien Ghost

A Drawing Of the Alien Ghost
Community content is available under CC-BY-SA unless otherwise noted.
Advertisement