A Winning Smile appears to be a blue fleshy creature resembling a dog/hyena. It's eyes are more unnatural than ours, as it's square eyes and mouth are like those of a human's. It is unknown how exactly it kills its victims, but judging from the possibly last second photo caught here, it presumably attacks them similar to a hyena, but the face possibly aids it into more supernatural stuff.

A Winning Smile is a neutral/extremely hostile entity, known for entering peoples houses and killing them. what is strange about this creature is after the victim is killed, their body reanimates into a copy of the creature. in order to be safe from a winning smile, a person must take a picture of the creature which on camera will reveal unusually discolored human eyes and teeth, but in person the creature chooses not to be seen, which is why victims are killed very quickly. the way it kills victims varies. most of the time it will act like a normal hyena, other times it will use random abilities such as paralyzing its victim, or using void manipulation to erase the victim from existence. if it chooses to add a clone to its hidden army however, it will not kill them, rather it will use the old hyena method and wait. 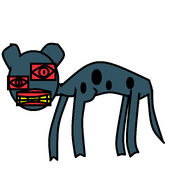